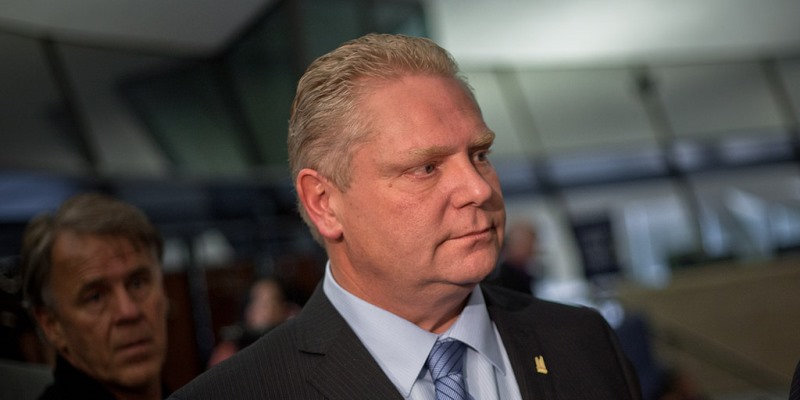 Ontario’s population is aging. The Spring 2018 Ontario Population Projections Update from the Ministry of Finance forecasts population and age structure for the province and its 49 census divisions, and presents some sobering numbers for policymakers at Queen’s Park.

The base reference scenario for the province projects that between 2017 and 2041, Ontario’s population will grow by 30.2 per cent going from 14.2 to 18.5 million. The main issues, however, concern the distribution and composition of that population.

A shrinking working age population has the potential to produce a relative decline in workers and this has implications for the province’s economic growth, government revenues and spending, as well as service provision for an aging population.

Second, the province’s population will be increasingly concentrated in the Greater Toronto Area (GTA) as it’s projected to be the fastest-growing region of the province. The GTA’s population is expected to increase by 2.8 million (or 40.8 per cent), to reach almost 9.7 million by 2041. Moreover, the GTA’s share of provincial population is projected to rise from 48.3 per cent in 2017 to 52.3 per cent in 2041. This concentration of population will create infrastructure and housing challenges and will continue to skew the province’s economic development away from regions outside the GTA.

Clearly, the regional effects of demographic change will be profound. While the entire province is aging, the GTA is expected to continue having the youngest age structure while other regions of the province will be much older. As the chart below illustrates, if one expands the definition of an aging population to include Ontarians aged 55 years and over, the relative youthfulness of the GTA is further highlighted. 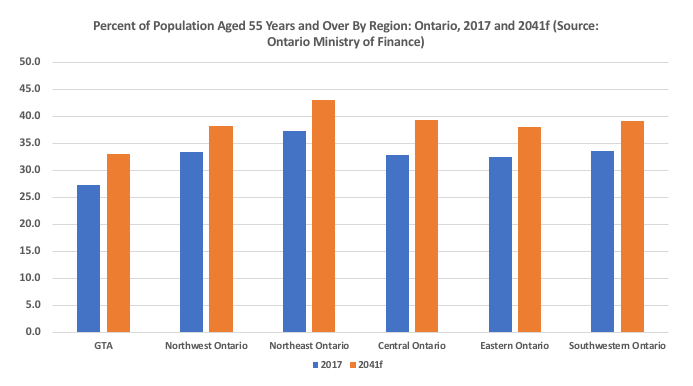 In 2017, 27 per cent of the GTA’s population was already in the 55 years and over age category, and by 2041 that number will reach a forecasted 33 per cent. International migration and natural increases from the birth rate is strongest in the GTA and will insulate the region from the effects of an aging population, compared to the rest of the province.

So, not only does Ontario have an aging population—with its anticipated effects on the demand for health care, long-term care services and the rest of the economy due to the labour supply—but it also has a wide differential in the impact of aging across regions. The GTA will continue to grow in relative population share and remain much younger than the rest of the province while the regions outside the GTA will shrink relative to the GTA. And also be much older. Rising health-care costs from an aging population will be more pronounced in regions outside the GTA while the economy will be less dynamic. That’s a bad combination.

If the face of slower economic growth that may accompany an aging population, Ontario’s government should enact reforms that will make government spending and service provision more efficient while enacting tax reform designed to boost economic growth. Moreover, it may also need to tailor some of these policies to regional needs, as regions outside the GTA are harder hit by the demographics of an aging population.

Most importantly, the Ford government should start addressing the future now at its relative leisure rather than later in a hurry.