Why did the planned surplus in 2015/16 turn to deficit? Higher federal spending

With much of the focus on last week’s federal budget being on the $29.4 billion deficit expected in 2016/17, an important takeaway that largely flew under the media radar is what caused the surplus that the former government had planned for 2015/16 to become a deficit, as is now anticipated.

To help explain, let’s compare and contrast the top line fiscal numbers contained in budget 2015 vs. budget 2016 (see chart below). First consider revenues. In budget 2015, the former government projected revenues for 2015/16 at $290.3 billion. Interestingly, despite the rhetoric about a weak economy, the current government now expects revenues to be very close at $291.2 billion—in fact, almost a billion higher. 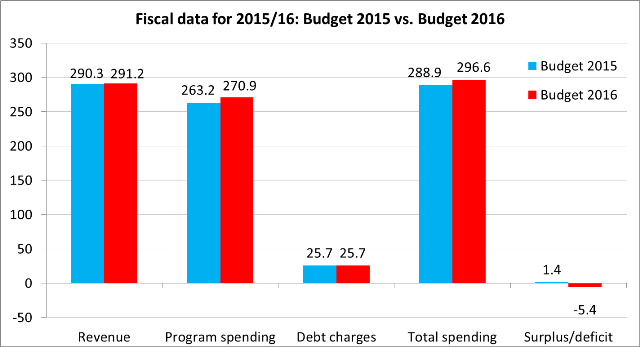 If we breakdown the various sources of spending as outlined in the two budgets, we can see that spending on Employment Insurance benefits is responsible for just $1 billion of the higher spending. Part of the increase is due to weaker economic conditions but part of it is because of an extension in EI benefits announced in budget 2016. However, the bulk of the increased spending planned by the current government is from a $6.7 billion increase in spending on “operating expenses,” which the government describes as “the cost of doing business for more than 100 government departments and agencies.”

The bottom line is that the $5.4 billion projected deficit in 2015/16 is being driven by higher spending delineated in budget 2016 than budget 2015—not a weak economy.