William Watson: budget numbers we really need—benefit per dollar spent at the margin

This comes up in the context of allocating $3.4 billion that the federal government is making available to municipalities—not provinces—on a 50-50 cost-shared basis to support public transit. The money is being offered in proportion to municipalities’ share of national public transit ridership, which the table in question shows.

Ontario’s cities and towns will get 44.01 per cent of the total, Quebec’s 27.35 per cent, and so on. It turns out there actually is public transit in Yukon, so it will get 0.03 per cent of the funds while the Northwest Territories will get 0.01 per cent (or $320,000—enough to buy, what?, the back third of a bus?). But Nunavut doesn’t have any public transit, has a zero share of national ridership, and therefore doesn’t get any money.

You can hear the protests organizing already. Discrimination against the North! Nunavut shafted on transit! Colonialized have-nots excluded again!

How long will it be before the injustice is remedied and Nunavut gets its few hundred thousand, too? I’d say less than two news cycles, though I wouldn’t start digging subway tunnels yet.

At bottom, Nunavuters annoyed with the formula would be arguing a good point. Economists always want public funds to go to the purposes that have the highest social payoffs at the margin. I doubt the payoff to public transit would be very high in Nunavut. But I also doubt that across the country the marginal payoff to public transit is in exact proportion to existing use of public transit. It would be pure fluke if it were. Yet that’s the implicit assumption of the proposed federal funding formula.

It might even be that marginal benefits are in inverse proportion to existing public transit ridership: Jurisdictions that have invested a lot and whose citizens already use transit intensively may not experience much further benefit at the margin. But they’re going to get the money.

Moreover, the whole country (except Nunavut) will be encouraged to over-invest in public transit since, under the cost-sharing formula, new dollars will only cost 50 cents. Most people I know (including myself) buy things when they’re 50 per cent off sale that they wouldn’t buy otherwise.

Data on marginal benefits for things not bought in markets are hard to come by. (When they are bought in markets, their price is a good index of their marginal benefit.) The below table, based on the budget’s Table A2.4, shows where new federal moneys are going to be spent over the next two years. (Actually, “shows where” is a little strong: In many cases the table hides more than it shows. For instance, what’s involved in the category “Better government for Canadians,” which is getting $1.1 billion of new money over the next two years?) 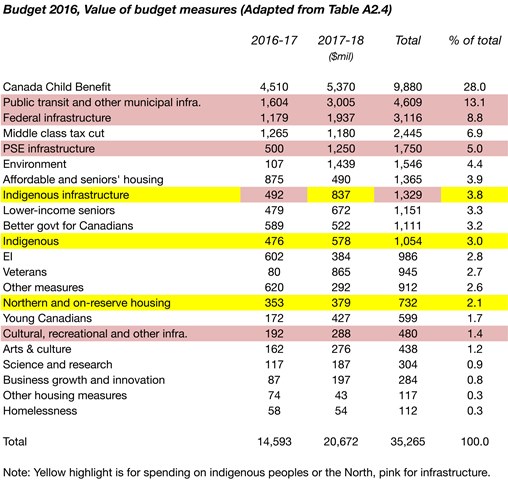 For simplicity, the table ignores the comparatively small tax increases the budget also makes and therefore shows only gross increases in spending. More than a quarter of new money is going for the Canada Child Benefit, even though the $9.9 billion in question is net of several existing programs that are being folded into it. That’s a big shift toward kids. Infrastructure, the pink entries, are another quarter, while spending on indigenous peoples and the North, shown in yellow, is another almost nine per cent.

For each of these entries an economist’s natural query is: What’s the social payoff per dollar spent? Not the “multiplier effect,” but the direct benefit, whether to the immediate beneficiaries or to anyone else who might be affected by any “positive externalities.” (In a throwback to the 1970s, the budget does try to calculate employment multipliers. It turns out the effects of all this spending are pitiably small, given the tens of billions involved.)

Unfortunately, social benefits don’t reveal themselves writ large in the sky. The political and economic debate over the budget will therefore be—and should be—about whether in some of these areas, maybe all of these areas, too much money is being sent for too little gain.