In his Globe and Mail commentary two days before Halloween, my friend and colleague at McGill, Christopher Ragan, in effect dressed up as John Kenneth Galbraith, making special reference to the Canadian-born economist’s 1958 book, The Affluent Society, in which Galbraith argued that American society had the world’s most advanced and plentiful private goods but was ignoring its public sector, which is essentially the argument Chris Ragan makes about Canada in 2015.

In one of the book’s more famous passages, Galbraith writes:

The family which takes its mauve and cerise, air-conditioned, power-steered and power-braked automobile out for a tour passes through cities that are badly paved, made hideous by litter, blighted buildings, billboards and posts for wires that should long since have been put underground. They pass on into countryside that has been rendered largely invisible by commercial art… They picnic on exquisitely packaged food from a portable icebox by a polluted stream and go on to spend the night at a park which is a menace to public health and morals. Just before dozing off on an air mattress, beneath a nylon tent, amid the stench of decaying refuse, they may reflect vaguely on the curious unevenness of their blessings…

The passage is interesting in many respects:

•    The anachronistic reference to “icebox.”

•    The idea that American cars—basically the only cars available in North America in 1958— represented the zenith of technological achievement. (It’s been a long time since that was true.)

•    The characterization of any aspect of 1950s prepared food, even just its packaging, as “exquisite.”  (We who had experience of such food—remember Swanson TV dinners?—would choose a different adjective.)

•    Also the reference to “public morals.” What were those again?

But on Galbraith’s serious point, that in 1958 the public aspects of life were in squalor, maybe that was true then but in most respects we are doing much better now.

It’s true that in Montreal, our roads are chronically potholed and some of our highways, overpasses and bridges are literally crumbling. But does that come from any general reluctance to invest in public goods, as Chris Ragan argues?

I don’t know how Quebecers in general feel when they pay their taxes, which are much higher than they were in 1958. No doubt many of us grumble and are reluctant to pay. But pay we do. And at least some of us keep electing governments that have chosen not to reduce the share of taxes in provincial GDP by any noticeable amount.

Consistent time series of taxes/GDP are hard to get all the way back to 1958, but the OECD does track tax revenues as a percentage of GDP from 1965 on. In that year (see chart below) taxes were 25.2 per cent of GDP for Canada as a whole, which, after five years of the Diefenbaker government and two of Pearson’s, was probably greater than in 1958. 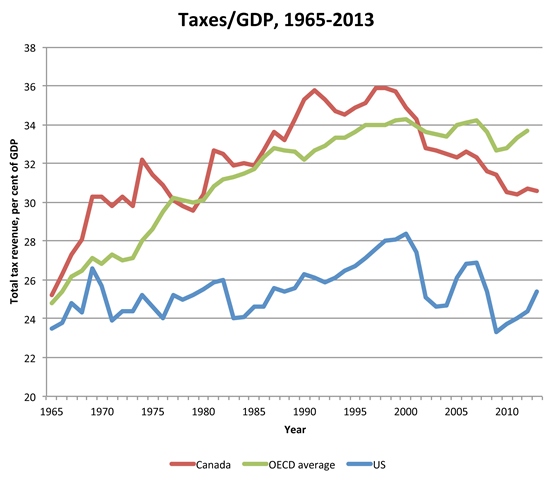 What has happened since? The tax ratio grew steadily until the end of the 1990s, when it peaked at 35.9 per cent of GDP. It has since declined but is still five points of GDP above its 1965 value. By contrast, in Galbraith’s (adopted) U.S., not a lot has happened to the ratio in five decades.

What’s the story for Quebec?

In 1958 in Quebec, much social spending was still conducted in the charitable sector. If you look at the February 1958 provincial budget, total expenditures plus debt interest were just $503.4 million. (Yes, million, not billion!) In 2015 dollars, using the Bank of Canada’s Inflation Calculator, that’s $4.2 billion. Quebec’s population is 50 per cent higher now than it was then, so call the 2015 equivalent $6.3 billion. What’s current provincial spending? It’s $98.6 billion, according to the 2015 budget, more than 15 times greater.

Yes, some of Quebec’s public infrastructure is in terrible shape. But instead of sending good money after bad—entrusting more infrastructure funding to an institution that has shown it’s not inclined to do maintenance and upkeep—we should look for an institution or institutions that will be better custodians of our money.