The federal budget of 1917, Canada’s last without an income tax, was brought down on April 24 of that year, just 12 days after what many regard as the country’s coming of age at the battle of Vimy Ridge. In his budget speech, which, like many in that era and none in our own, took up only three and a half pages of Hansard, Conservative Finance Minister Sir Thomas White presented a breakdown of revenues for the fiscal year that had ended March 31 (see Table 1).

How things have changed in 100 years!

A century ago a finance minister actually spelled out all the zeroes in a federal revenue or expenditure item, occasionally even to the cent. Yet despite the long strings of zeroes, the amounts are tiny by modern standards. Inflation has been epidemic between now and then, of course, but even after being inflated up to the dollars of 2016, the 1917 numbers are minuscule. In today’s dollars, total federal revenue in 1917 was just $3.65 billion, compared to $295 billion in budget year 2015-16, an amount more than 80 times greater. To be sure, Canada’s population has grown since 1917. But it is only four and a half times larger than it was. So even after adjusting for population, today’s federal revenue per person is more than 18 times larger in real terms than it was in early 1917, roughly $8,200 per person now compared to only $450 per person then (with both amounts expressed in $2016).

Translating from the dollars of one century to those of another isn’t easy, of course. Many goods we have today we didn’t have then and vice versa. Who now heats their homes with coal shovelled through a grate or cools their food with weekly deliveries of ice blocks for their icebox? No one then talked on a cellphone or took airplane trips. Moreover, using the consumer price index to figure out the value of goods purchased through the government sector can also be misleading, since the prices of what government spends its tax revenues on may have risen more quickly than the index of all consumer prices. Even allowing for possible measurement biases, however, there’s little doubt that today’s federal government is orders of magnitude bigger than even the wartime federal government of 1917.

How Ottawa raised revenue was also quite different in 1917. As had been true since Confederation 50 years earlier, Ottawa got most of its money—between a half and two-thirds of the total—from the customs tariff, that is, general taxes on imported goods levied at the border. The $134 million brought in that way in 1917 is equivalent to $2.1 billion in $2016. As it turns out, in fiscal year 2015-16, Ottawa actually collected $5.9 billion in customs tariffs, close to three times its tariff revenue of 1917 and almost two-thirds more than its total revenue 100 years ago. Yet the federal government has grown so much that this three-times greater tariff revenue now accounts for just 2.0 per cent of its total revenue and is an almost forgotten part of the tax mix.

At first blush, the then all-important customs tariff might seem to be a consumption tax, of which economists tend to approve, since consumption taxes avoid the “double taxation of saving.” (By contrast, income taxes hit a person first on his or her income, but also then again when that same income, if saved, earns a return.) On the other hand, to the extent that the tariff taxed intermediate goods, construction materials, or machinery, its weight would also be felt by savers, whose savings, lent to industry, often went to such purposes. Out of any given income, people can only consume or save. If you tax people on both their consumption and their saving, you are effectively taxing them on their income. At the time, however, the tariff was widely regarded as, and may well have been, a tax on consumers.

The same holds true for excise taxes, which are taxes on specific goods. An increase in excises was one of the first steps taken to finance war spending. Their exact effects depend on who consumes the goods being taxed. The increase for champagne and sparkling wine had some MPs cheering “Hear, hear” when Finance Minister White announced it in February 1915. Other excises, such as for tea, coffee, and tobacco, were on products consumed across income groups, which likely made them regressive in their impact, that is, proportionally heavier on low-income than high-income consumers.

“Other” revenues accounted for more than a quarter of all federal revenue in 1917. Among them were income from the post office and railway departments, which were not yet Crown corporations but operated like any other department of government. The revenues they generated were balanced off by their operating expenditures. In that era, unlike today, the post office typically ran a small surplus and so contributed net revenue to the government. The railway department, however, often required large net spending.

In early 1917, the only federal tax aimed at any kind of income was the Business Profits War Tax, introduced just a year earlier to tax the “profiteering” that was universally derided as a contemptible aspect of the wartime home front. The Borden government’s view well into 1917 was that such a tax, retroactive to the start of the war and imposed at a steeply rising rate on any profits over seven percent, was the best way to seize incomes swollen by the wartime boom. In its first year in operation, however, the profits tax accounted for only a little over five per cent of federal revenue.

The federal government’s sources of revenue in 1917 are a stark contrast with those of today (as Table 2 illustrates). 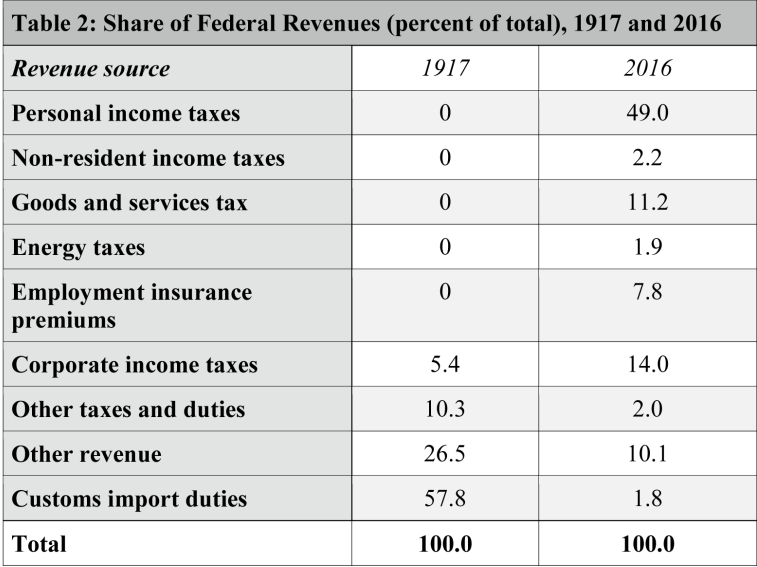 Taking all income and income-type taxes together, including personal, non-resident, and corporate, as well as employment insurance premiums, which are a tax on wage income, the total comes to almost three-quarters of federal revenues and 10.9 per cent of GDP. By contrast, in 1917, just 5.4 per cent of Ottawa’s revenues came from an income tax, the new Business Profits War Tax.

Whether Canada’s federal government would have grown so dramatically between 1917 and 2017 without the income tax is an interesting counterfactual question. Whether our 100-year transition to such extensive reliance on income taxes needs to be reconsidered is an important practical question.