Appeared in the National Newswatch, September 6, 2018 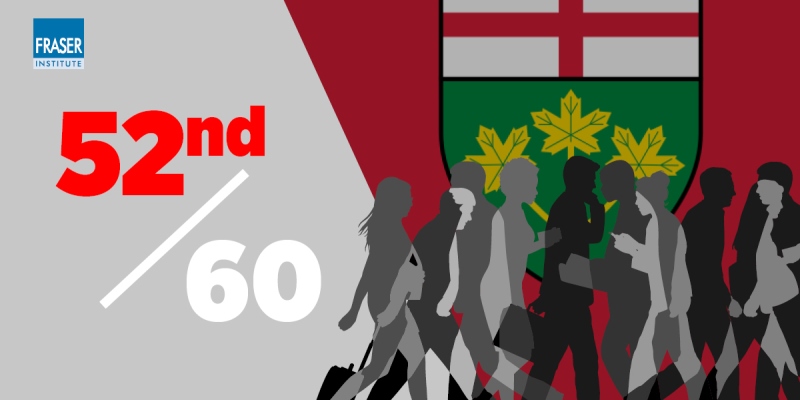 When you compare Ontario’s labour market to other North American jurisdictions over the past three years, it’s not a pretty picture.

Premier Doug Ford’s government has an opportunity to help turn things around. But it will take a big change in policy direction. And there’s a lot at stake. When Ontario’s labour market performs well, workers benefit from ample job opportunities, growing wages and a prosperous economy.

To properly judge the strength of Ontario’s labour market performance, we must look beyond the headlines about how many jobs were created last month or whether unemployment has ticked up or down. It’s crucial to use a more comprehensive measure.

In a recent Fraser Institute study, we compare the labour market performance in Canadian provinces and U.S. states from 2015 to 2017. The study calculates an overall score (from 0 to 100) for each jurisdiction based on eight indicators including private sector and total employment rates, the unemployment rate, the extent of under-employment (measured as the share of involuntary part-time workers) and worker productivity (measured by the average value of goods and services produced by each worker). Higher scoring jurisdictions ranked better.

Ontario’s overall score on labour market performance was an abysmal 44.5 out of 100. That puts the province near the bottom, ranking 52nd of 60 jurisdictions. For a province that has long played an essential role in the Canadian economy, this is an alarming result, both for Ontarians and Canadians more generally.

One of the major sore spots for the province is its relatively low private-sector employment rate, which averaged just 40 per cent (ranking 52nd). Like most other provinces, Ontario has a greater share of total employment in the government sector relative to U.S. states. But it’s important to have a strong private sector because that’s where the wealth is generated to support government activity including government jobs.

Ontario also underperformed on the average unemployment rate (5.5 per cent, ranking 45th overall). For perspective, in top-performing North Dakota, the average unemployment rate (2.8 per cent) was about half Ontario’s rate. Moreover, compared to people in other provinces, Ontarians are more likely to experience long spells of unemployment. Over the three-year period, an average of approximately one-in-five (19.8 per cent) unemployed Ontarians were unemployed for 27 weeks or more—the second-highest rate among Canadian provinces after Alberta.

Ontarian workers were also much more likely to be stuck in part-time work when they would otherwise want full time work. On this indicator of under-employment, Ontario ranked 58th overall with an average share of 5.3 per cent involuntary part-time workers relative to the total number of employed. This leaves Ontario tied with Newfoundland as the lowest ranked Canadian province, with Nevada being the only state to rank lower.

Finally, on worker productivity, another crucial economic indicator, Ontario lagged behind. With output per worker of only $111,634, Ontario ranked a paltry 52nd. Weaker productivity means Ontarian workers will see lower growth in compensation (wages, salaries, benefits) and living standards relative to workers in other jurisdictions.

If Premier Ford wants to help strengthen Ontario’s labour market, he can start by reversing the damaging policies that drive Ontario’s poor performance.