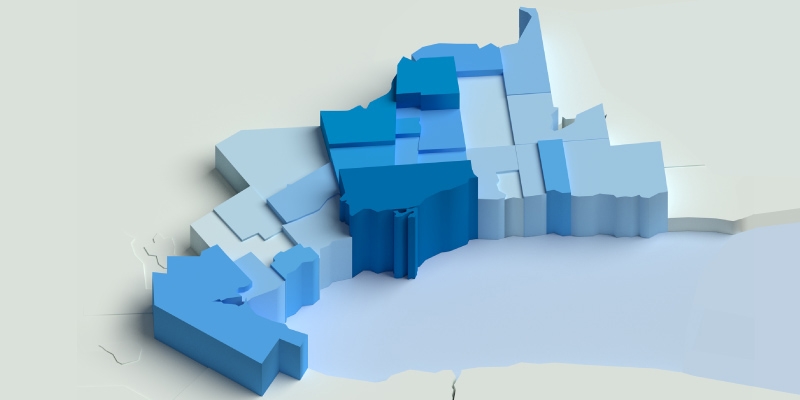 Municipal governments play an important role in the lives of Ontarians by providing key services and collecting taxes and fees. But it is not always straightforward for citizens to understand the state of their municipal government’s finances, and even less straightforward to understand how their government performs relative to other municipalities. To help create awareness and encourage debate, this report provides a summary analysis of important financial information for 26 municipalities in the Greater Toronto and Hamilton Area (GTHA), spanning the eight-year period from 2009 to 2016.

There is considerable variation in per-person spending among the GTHA’s 26 municipalities. Toronto, the region’s largest city, was the highest spender in 2016 ($4,010 per person), while Milton spent the least ($2,385 per person). Mississauga, Brampton and Hamilton, the region’s next largest cities, spent $2,705, $2,804, and $3,086, respectively. From 2009 to 2016, however, Toronto and Hamilton saw some of the region’s greatest reductions in real per-person spending: 7.7% and 5.9%, respectively. Over the same period, per-person spending grew in Mississauga (9.4%) and Brampton (15.1%). Toronto’s largest spending item (by function) was transportation ($1,151 per person), which includes regionally significant infrastructure such as the Toronto Transit commission and municipal expressways. By object, the largest spending category regionwide was employee compensation (salaries, wages and benefits), accounting for 47.4% of all municipal spending in the GTHA. Only three municipalities (Pickering, Toronto, and Whitby) dedicated more than 50% of spending towards this category.

As with spending, there is great variation in levels of per-person revenue among GTHA municipalities. In 2016, King Township collected the most revenue per person ($5,130), while Georgina—another rural municipality in York Region—collected the least ($2,799). Mississauga collected the second-lowest amount of revenue per person ($3,049), while Toronto collected the fourth most ($4,476 per person). Between 2009 and 2016, Aurora’s per person revenue collection grew the most (73.2%), while Ajax saw revenue decrease the most in the GTHA (11.8%). As with spending, Toronto’s revenue decreased over this period (3.3%), while Mississauga, Brampton, and Hamilton saw revenues increase by 7.0%, 5.1%, and 0.7%, respectively.

Across the GTHA, 38.9% of municipal revenue came from property taxes in 2016. Reliance on this revenue source is typically higher in Durham Region, and lower in York Region, where user fees play a greater role. Toronto and Hamilton, the GTHA’s only two single-tier municipalities, rely more heavily on transfers from the provincial and federal governments. Development charges represent a greater share of revenue in several fast-growing municipalities, such as Milton, Markham, and Brampton, but also in several municipalities experiencing below-average population growth, such as Halton Hills and Aurora, raising important questions about these fees’ purpose, and their application in practice.