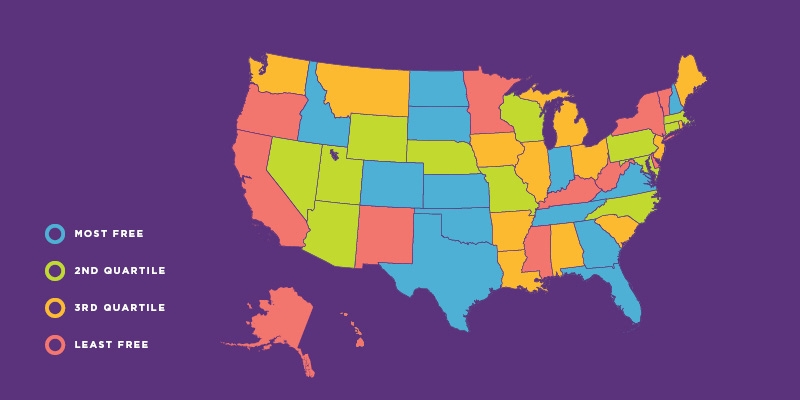 Economic Freedom of North America 2019 is the fifteenth edition of the Fraser Institute’s annual report. This year it measures the extent to which—in 2017, the year with the most recent available comprehensive data—the policies of individual provinces and states were supportive of economic freedom, the ability of individuals to act in the economic sphere free of undue restrictions. There are two indices: one that examines provincial/state and municipal/local governments only and another that includes federal governments as well. The former, our subnational index, is for comparison of individual jurisdictions within the same country. The latter, our all-government index, is for comparison of jurisdictions in different countries.

The all-government index
The all-government index includes data from Economic Freedom of the World (Gwartney, Lawson, Hall, and Murphy, 2019) which is only available on the national level. These data enable us to better compare Canadian, Mexican, and US sub-national jurisdictions to each other by taking into account national policies that affect all jurisdictions within each country. Canada and the United States have similar scores in the EFW report and are both are typically in the top 10 nations. Mexico ranks much lower, at 76th this year, though that is an improvement over past years.

Two years ago, in the all-government index for 2015 the top jurisdiction was Canadian, with Alberta in first place for the sixth year in a row with a score of 8.0, though tied with New Hampshire. In 2015, however, Alberta elected new political leaders who made changes in taxation, spending, and regulation that have had a significant negative effect on their economic freedom. As a result, Alberta has now fallen to a tie for 24th place at 7.94, barely ahead of British Columbia at 7.93. The top jurisdiction is New Hampshire at 8.13, followed by Florida at 8.07. The next highest Canadian provinces, Saskatchewan and Ontario, are 48th and 49th at 7.81 and 7.79. Alberta has recently changed policy course again, creating an interesting natural experiment in how changes in government and policy direction affect economic freedom at the subnational level.

The highest-ranked Mexican state is Guanajuato with 6.49, followed closely by Baja California, Tlaxcala, and Jalisco all with 6.48. They are over a full point behind those ranking lowest in Canada and the United States. The lowest-ranked state is Ciudad de México at 5.56, followed by Colima at 5.78, and Campeche at 6.05. The four lowest-ranked Canadian provinces are all within less than one tenth of a point of each other and the six lowest are behind all 50 US states. The province of Newfoundland & Labrador is 60th with 7.56, just behind Prince Edward Island and Nova Scotia (58th) at 7.57, and New Brunswick (57th) at 7.59. The lowest-ranked states in the United States are Delaware at 7.74 in 54th place, following New York (7.75 in 53rd) and Minnesota and Rhode Island (7.78, tied 51st).

Historically, economic freedom had been declining in all three countries until recently. From 2004 to 2013, the average score for all 92 jurisdictions fell from 7.64 to 7.09. Canadian provinces saw the smallest decline, only 0.08, whereas the decline in the United States was 0.59 and in Mexico, 0.63. However, economic freedom has increased in the United States and Mexico since 2013. In contrast, in Canada, after an increase in 2014, it has fallen back below its 2013 level.

The subnational indices
For the purpose of comparing jurisdictions within the same country, the subnational indices are the appropriate choice. There is a separate subnational index for each country. In Canada, the most economically free province in 2017 was Alberta with 6.60, followed by British Columbia with 6.25, and Ontario at 5.57. However, the gap between Alberta and second-place British Columbia continues to shrink, down from 2.34 points in 2014 to 0.35 in 2017. The least free by far was Quebec at 2.86, following Nova Scotia at 3.94 and New Brunswick at 4.25.

In the United States, the most economically free state was New Hampshire at 7.93, followed by Florida at 7.90 and Tennessee at 7.63. Virginia is fourth at 7.62 and Texas is fifth at 7.53. (Note that since the indexes were calculated separately for each country, the numeric scores on the subnational indices are not directly comparable across countries.) The least-free state was New York at 4.49, following West Virginia at 4.77. Alaska was 48th at 5.04, Vermont was 47th at 5.06, and Oregon was 46th at 5.13.

In addition to the tables found in chapter 3, our new interactive website at www.fraserinstitute.org/economic-freedom/map contains all the latest scores and rankings for each of the components of the index as well as historical data on the overall and area scores. The full dataset is also available for download at that same website.

In addition, economic freedom at the subnational level has generally been found to be positively associated with a variety of measures of the per-capita size of the economy and the growth of the economy as well as various measures of entrepreneurial activity. There are now more than 280 articles by independent researchers examining subnational economic freedom using the data from Economic Freedom of North America. (Appendix C lists some of the most recent ones.) Much of that literature discusses economic growth or entrepreneurship but the list also includes studies of a variety of topics such as income inequality, eminent domain, and labor markets. The vast majority of the results correlate higher levels of economic freedom with positive outcomes, such as economic growth, lower unemployment, reduced poverty, and so on. The results of these studies tend to mirror those found for these same relationships at the country level using the index published in Economic Freedom of the World.