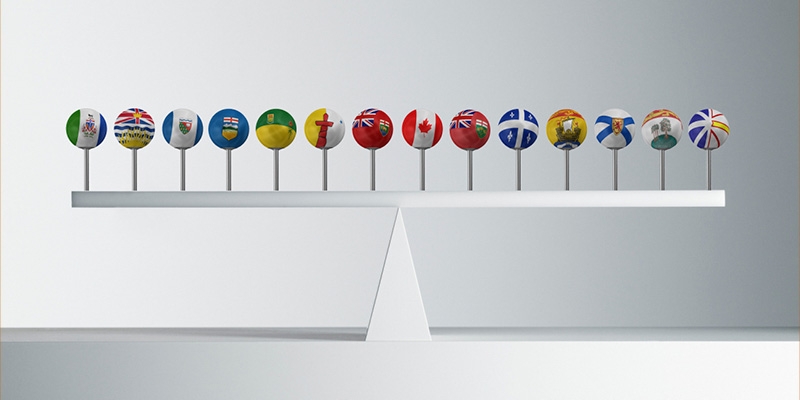 Is Canada’s existing system of federal transfers designed to respond adequately to economic volatility across the country and more precisely to rapid changes in relative income levels across provinces? The purpose of this paper is to investigate this question and to identify dimensions and characteristics of existing programs and rules that may inhibit the capacity of Canada’s fiscal arrangements to respond adequately to sudden changes in the absolute or relative changes in the fortunes of provincial economies. Given the oil price collapse of early 2020 and the severe economic effects resulting from the COVID-19 crisis, this question has taken on increased urgency.

In other words, the gap between richer and poorer provinces has shrunk in recent years and is likely to continue shrinking in the years ahead. This paper examines the extent to which our institutions of fiscal federalism are designed to respond adequately to these changes.

Specifically, we examine the following issues:

Taken together, our investigation of these issues provides worrying evidence that Canada’s fiscal arrangements have features that limit their ability to respond effectively to rapid changes in the relative fiscal capacity of Canada’s provinces.

More specifically, Canada’s Fiscal Stabilization Program, which is the program explicitly intended to help provinces cope with sudden revenue downturns, is constrained by an arbitrary per-capita cap that renders it essentially useless at achieving its stated objectives.

Meanwhile, the flexibility of the Equalization Program during periods of rapid fiscal capacity convergence whereby provinces are becoming increasingly able to generate similar per-capita tax revenues is constrained by a Fixed Growth Rate rule that requires the program to continue growing year after year, even if the gap between richer and poorer provinces shrinks. Further, a combination of lags in data collection and the use of a multi-year average to assess provincial fiscal capacities restricts the ability of the program to respond to rapid but long-lasting changes in provincial fiscal capacity.

Identifying solutions to these problems is not straightforward. Balancing considerations of equity and affordability while simultaneously seeking to minimize the harmful unintended policy incentives of these programs is the ongoing and constant work of Canadian fiscal federalism policymakers. Nevertheless, this paper presents evidence that suggests that Canada is likely entering another period of significant fiscal convergence and raises worrying questions about whether our existing system of fiscal transfers is designed to respond adequately to this development.

This paper identifies these issues and questions, but generally does not prescribe policy reforms. Instead, our purpose is to point out program features and characteristics that could potentially produce undesirable results or exacerbate regional tensions, particularly during and in the immediate wake of the COVID-19 economic crisis. While it is beyond the scope of the paper to define clear solutions to the challenges identified here, we do at times suggest policy options that may improve the performance of our fiscal federalism arrangements at the margin. However, this paper’s overarching objective is to generate public discussion and encourage further analysis about whether the programs in question stand in need of reform and, if so, what types of reforms would in fact be salutary.