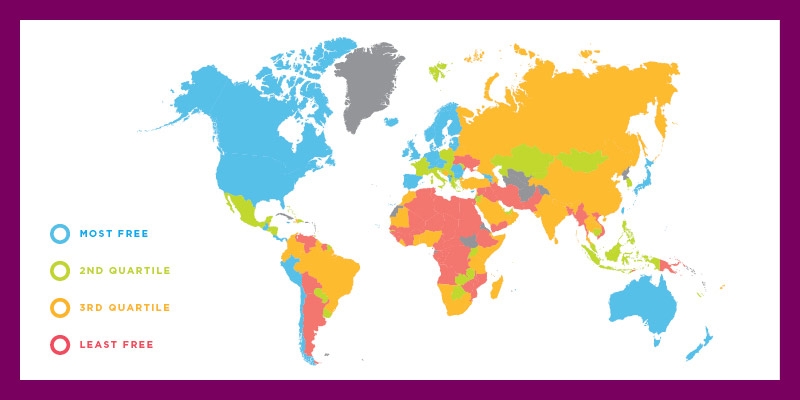 The index published in Economic Freedom of the World measures the degree to which the policies and institutions of countries are supportive of economic freedom. The cornerstones of economic freedom are personal choice, voluntary exchange, freedom to enter markets and compete, and security of the person and privately owned property. Forty-two data points are used to construct a summary index, along with a Gender Legal Rights Adjustment to measure the extent to which women have the same level of economic freedom as men. The degree of economic freedom is measured in five broad areas.

Jurisdictions
The total number of jurisdictions in the index has increased to 165 from 162 with the addition of Comoros, Djibouti, and Somalia. The data are available annually from 2000 to 2019 and for years ending in zero or five back to 1970. This dataset makes it possible for scholars to analyze the impact of both cross-country differences in economic freedom and changes in that freedom across a time frame of several decades.

Separate estimates are also provided at five-year intervals back to 1950 on the economic freedom website.

Economic freedom around the world in 2019

Top-rated countries
The most recent comprehensive data available are from 2019. Hong Kong remains in the top position. The apparent increased insecurity of property rights and the weakening of the rule of law caused by the interventions of the Chinese government during 2020 and 2021 will likely have a negative impact on Hong Kong’s score, especially in Area 2, Legal System and Property Rights, going forward.

Economic freedom continues to grow
Exhibit 1.4 shows the global average for all 123 nations with complete data since 2000. Between 2000 and 2019, the average economic-freedom rating increased to 7.04 from 6.61, about four tenths of a standard deviation over this period.

Chapter 1: Economic Freedom of the World in 2019
The authors of the report, James Gwartney, Robert Lawson, Joshua Hall, and Ryan Murphy, provide an overview of the report and discuss why economic freedom is important.

Chapter 2: Country Data Tables
The tables in chapter 2 provide detailed historical information for the 165 jurisdictions in the index. For each jurisdiction for which data were available, the tables show the overall EFW index rating and the rank of that country for the years 1980, 1990, 2000, 2005, 2010, 2015, and 2019.

Chapter 5: The Dangers of South Africa’s Proposed Policy of Confiscating Property
Martin van Staden
South Africa’s ruling party, the African National Congress (ANC), has proposed legislation and a constitutional amendment to allow the expropriation of fixed property without compensation. This chapter discusses the powers this would grant the government, their potential and even probable abuses, and the threat this poses to the nation’s poorest and most marginalized populations—mostly poor blacks—who could become victims to powerful forces using new powers for their own benefit. The author argues that property rights, as a necessary precondition of economic freedom, are fundamental to human dignity and notes the economic collapse of Zimbabwe and Venezuela when property rights were systematically violated.