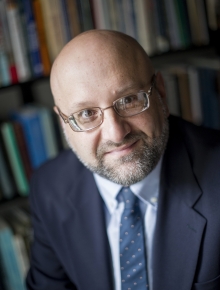 Steven Horwitz was a Senior Fellow of the Fraser Institute and the John H. Schnatter Distinguished Professor of Free Enterprise in the Department of Economics in the Miller College of Business at Ball State University in Muncie, IN. He was the author of several books including Monetary Evolution, Free Banking, and Economic Order and Microfoundations and Macroeconomics: An Austrian Perspective. He wrote extensively on political economy, economic and social theory of the family, monetary theory, and macroeconomics. Prof. Horwitz conducted nationally recognized research on the role of the private sector during Hurricane Katrina for the Mercatus Center, where he was an Affiliated Senior Scholar.

In 2010, Prof. Horwitz was awarded the Hayek Prize by the Fund for the Study of Spontaneous Order; at St. Lawrence University, he was granted the Frank P. Piskor Lectureship for 1998-99 and received the J. Calvin Keene Award in 2003. Prof. Horwitz lectured across the U.S., Canada, Europe, and South America.