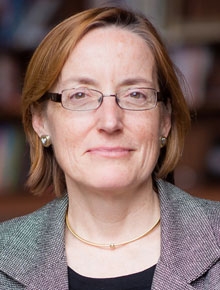 Sandra J. Peart, Ph.D., Senior Fellow at the Fraser Institute, became the fourth dean of the Jepson School of Leadership Studies in August 2007. In 2018, she was appointed to the E. Claiborne Robins Distinguished Professorship in Leadership Studies. She is past president of the International Adam Smith Society and the History of Economics Society and has written or edited ten books, including most recently, Towards an Economics of Natural Equals: A Documentary History of the Early Virginia School of Political Economy, from Cambridge University Press (2020). She is the author of more than 100 articles in the areas of constitutional political economy, leadership in experimental settings, ethics and economics, and the transition to modern economic thought. Her popular articles on leadership, ethics, higher education, and economic themes have appeared in The New York Times, The Chronicle of Higher Education, USA Today, and the Washington Post.

Peart’s research focuses on the role and responsibilities of experts in society. She examines these questions as a historian of economic thought with a particular interest in the economics of Adam Smith and John Stuart Mill.

Peart obtained her doctorate in economics from the University of Toronto. She is an elected member of the Mont Pelerin Society, the Royal Society for the Encouragement of Arts, Manufactures and Commerce, and the Reform Club.

The Essential John Stuart Mill spotlights the famed English philosopher and economist whose views on liberty, individualism and women’s rights were well ahead of his time.