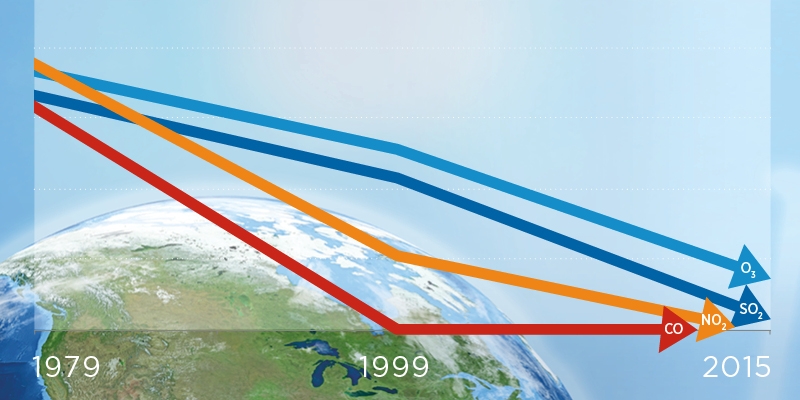 Canadians have long been concerned about the state of our air quality and the belief that air pollution is a major problem seems to be widespread. This publication examines the evolution of air quality in Canada from the 1970s onward and looks at how the current state of air quality compares to the stringent standards established by Canadian government policy. The conclusion is that air quality in Canada has improved substantially and that this significant change over the past four decades occurred at the same time there was considerable growth in Canada’s population, economic activity, energy use, and consumption of motor fuel.

Socioeconomic trends
Between 1970 and 2015, real gross domestic product increased by 242% and the Canadian population grew by 68%. From 1980 to 2015, consumption of motor fuel rose by 26% and from 1995 to 2015 energy use increased 21%. At the same time emissions and ambient levels of major air pollutants dropped significantly, indicating the extent to which air pollution has been decoupled from energy use and economic growth in Canada. For this reason, discussions about the need for new policies to tighten emission policies even further should begin with the recognition that air pollution has already substantially declined in Canada and is largely in compliance with some of the strictest standards in the world.