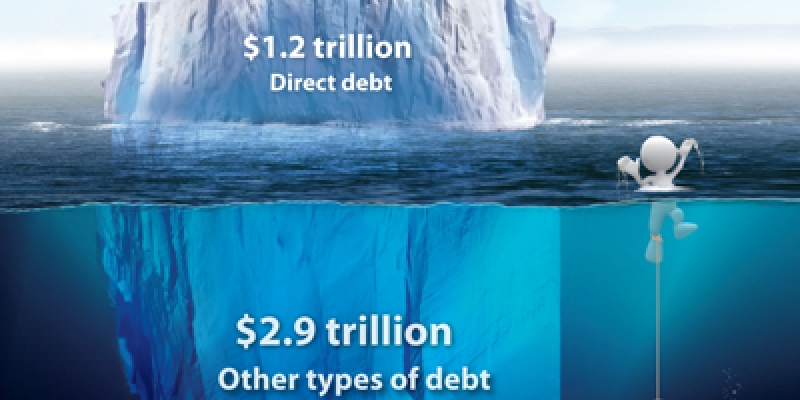 With Canadian governments having returned to deficit-financed spending, the growth in direct government debt has re-emerged as a serious public policy issue in Canada. The net direct debt of all three levels of government increased from $872.2 billion to $1.2 trillion between 2007/08 and 2011/12. Apart from direct debt, government indebtedness also includes debt guarantees, contingent liabilities and contractual commitments, and unfunded program obligations. When liabilities other than direct debt are included, the total liability of Canadian governments (federal, provincial, and local) increases dramatically to $4.1 trillion in 2011/12, up 20.9 percent from 2007/08. That $4.1 trillion translates into $117,948 for every Canadian citizen, $243,476 for each income taxpayer, or 230.2 percent of GDP.

Governments must recognize the extent of the liabilities that exist for Canadian taxpayers. This means acknowledging not just accumulated direct debt but also the enormous program obligations and other liabilities. Governments must be vigilant not to assume new and larger unpaid obligations, and they must be prudent in forming policies to deal with those that already exist. Along with restructuring program obligations, governments should make balancing their budgets a more immediate priority. Otherwise, the annual deficits currently planned for the foreseeable future will simply add to the existing stock of government debt.