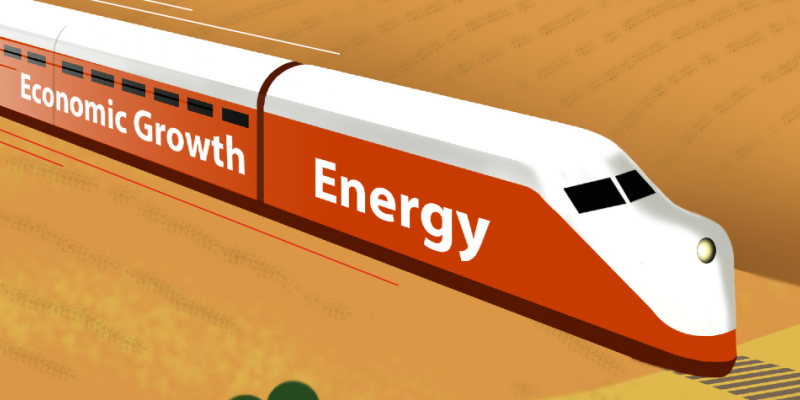 Statistical evidence can be used to establish correlations, but we are asking a question about causality, and as the saying goes, one does not imply the other. In recent decades, new statistical methods have been developed that allow for investigation of a particular kind of causality, and these methods have been applied to the energy-GDP question. The first purpose of this report is to explain what these methods are and how they have been used to examine the connection between growth and energy consumption around the world. The picture that has emerged is that growth and energy either jointly influence each other, or that the influence is one-way from energy to GDP, but in either case the evidence now points away from the view that energy use can be restricted (or, equivalently, prices artificially increased) without constraining future growth. Also, out of all countries studied, Canada has yielded some of the most consistent evidence on this, in that studies done under a variety of methods and time periods have regularly found evidence that energy is a limiting factor in Canadian economic growth.

The second purpose of this paper is to discuss what the evidence indicates for Canada, including new evidence we provide based on our ongoing research on this topic. Our examination of Canadian data, applying the most modern time series econometric methods available, leads us to conclude that energy use in Canada is not a mere by-product of prosperity but a limiting factor in growth: real per-capita income is constrained by policies that restrict energy availability and/or increase energy costs, and growth in energy abundance leads to growth in GDP per capita. Thus, policies favouring the abundant availability of energy are important for sustaining strong economic growth, and policies that deliberately limit energy availability will likely have negative macroeconomic consequences.

These considerations are important to keep in mind as policymakers consider initiatives (especially related to renewable energy mandates, biofuels requirements, and so forth) which explicitly limit energy availability. Jurisdictions such as Ontario have argued that such policies are consistent with their overall strategy to promote economic growth. In other words, they assert that forcing investment in wind and solar generation systems— while making electricity more expensive overall—will contribute to macroeconomic growth. The evidence points in the opposite direction. Policies that engineer increased energy scarcity are likely to lead to negative effects on future GDP growth.

Economic growth in the modern world is fueled by energy. Although the total size of the economy tends to grow faster than total energy consumption, the two nonetheless trend together over the long run. Figure 1 shows that total world economic output has increased more than sixfold since 1980, while total energy use almost doubled. Figure 2 shows that for Canada over this period, Gross Domestic Product (GDP) doubled while energy use grew about 50 percent.

Statistical evidence can be used to establish correlations, but we are asking a question about causality, and as the saying goes, one does not imply the other. In recent decades, new statistical methods have been developed that allow for investigation of a particular kind of causality, and these methods have been applied to the energy-GDP question. The first purpose of this report is to explain what these methods are and how they have been used to examine the connection between growth and energy consumption around the world. A great deal of work has been done on this topic, though for reasons we will explain, economists have not yet settled on a single view on the question of how energy restrictions impact growth.

The second purpose is to discuss what the evidence indicates for Canada, including new evidence we provide based on our ongoing research on this topic. Notwithstanding the limitations imposed by data availability and methodological uncertainties, there is convincing evidence that energy and GDP are structurally related in such a way that policies to cut or constrain energy use, including well-meaning conservation programs, are limiting factors on income growth in Canada. Discussions about lackluster growth and productivity in Canada need to take into account the effects of energy policy. In particular, any claim that there are economic benefits attached to interventions in the energy sector that reduce demand, restrict use of conventional sources, and/or mandate use of costlier alternatives are at odds with evidence from Canada and around the world.

In this paper we will be focusing on the role energy scarcity plays in economic growth. There are several ways that scarcity can be measured. A common way is to think of the quantity of energy being constrained or expanded. When the Arab countries imposed an oil embargo on the west in 1973, they cut back the supply. In recent years, the shale gas revolution in the US has resulted in a large expansion in the quantity of natural gas.

In the empirical work on the energy-economy connection, the connection between scarcity and price is taken for granted, and we will likewise do so here. In other words, when we refer to policies that make energy more scarce or abundant, this should be understood as referring not only to policies that expand or contract the physical stocks of energy sources available to the market, but also policies that force energy prices above or below their underlying equilibrium values. A policy that makes energy more expensive than it otherwise would be is as much a scarcity-inducing policy as one that, say, forbids the development of a particular physical supply. And likewise, a policy that removes a price-inflating effect from the market is identical in its economic impact to one that increases the physical supply.

In what follows, we will usually speak in terms of the link between energy supplies and GDP growth, but the reader should bear in mind the implicit equivalence between policies that affect price and those that affect quantity.

2 National and international evidence on the energy-GDP link

Before proceeding with this section, the reader should scan Appendix I, which provides a detailed but non-technical overview of some key statistical concepts employed in the research literature. This will not only help in keeping track of the terminology, but will also allow greater precision in understanding the findings of the research literature, since they depend on the use of advanced econometric methods that often have important but subtle points of interpretation.

The key concepts we rely on are summarized as follows.

The relationship between economic growth and energy consumption has been extensively examined during last 30 years. The many papers published so far have yielded what appear to be conflicting and mixed results, but this is partly due to initial use of methods that later came to be seen as unreliable, as well as different choices of the variables to be included in the models (Belke et al., 2011). Many studies have focused on industrialized countries, since data for them are more available and trustworthy. Results differ among different countries, and even among studies looking at the same country.

Mehrara (2006) categorized publications into four “generations.” The first used a traditional VAR regression approach to infer a Granger-causal relationship between energy consumption and GDP. These early studies used the methods proposed in Granger (1969) and Sims (1972), the latter study providing a practical extension of Granger’s method. This methodology was applied from the late 1970s to the end of 1980s, and stationarity of the data was assumed.

The two main problems with the first generation papers were that sample lengths were very short, and that nonstationary data were being used in VAR models that presuppose stationarity. Second-generation studies addressed both issues by developing longer data sets and employing univariate Error Correction Models (ECM), which embed a cointegrating component to handle the nonstationarity problem, and later multivariate Vector Error Correction Models (VECM), also known as the Johansen-Juselius method. The two major studies in this group were Soytas and Sari (2003) and Soytas and Sari (2006). Both studies examined a long list of industrialized countries, including Canada, over the intervals 1950–1992 and 1960–2004, respectively. In the 2003 paper, no causality between energy and GDP per capita (or real income) was found for the US, UK, or Canada, while for France, Germany, and Japan it was found that causality runs from energy to income. In the 2006 study, energy was found to drive income for France and the US, while for the UK, Japan, Germany, and Canada they were found to cause each other. Ghali and El-Sakka (2004) examined Canada and found bi-directional causality between energy and GDP.

But by now, taking the literature as a whole, it was becoming clear that results tended to be unstable and dependent on the sample period. This led some authors to look for more robust methods.

The next methodological innovation, coined the fifth generation (Cores and Sanders, 2012), used ARDL methods more efficiently by combining many individual country data sets into one very long international data set called a panel. The two major studies to emerge in this group were Narayan and Smith (2007), covering the G7 countries over 1972–2002, and Lee et al. (2008) covering 22 OECD countries over 1960–2001. Narayan and Smith concluded that, for all G7 countries, energy causes income (real GDP per capita) and Lee et al. concluded that there is two-way causality between them.

This review does not exhaust the literature on either Granger causality testing or the relationship between energy and output. We do not, for instance, address the possibility of endogenous structural breaks, which can affect the power of tests for unit roots (Lee and Strazicich, 2001). Nor do we examine the possibility of nonlinearities in the relationship between energy and the macroeconomy. Hamilton (2011) discusses this issue, looking in particular at models allowing for asymmetries between the effects of oil price decreases and price increases. In general, proper handling of such methodological extensions require longer data sets than are available for our empirical application, and have not yet been fully taken into account in the energy literature. Also, we will be using a panel data set, and the theory governing how to apply these issues in a panel setting has not been derived.

Over time, as methods have improved and data availability has increased, the evidence has strengthened that energy availability causes income growth, or in other words is a limiting factor for output. It is either the case that growth and energy jointly influence each other, or that the influence is one-way from energy to GDP, but in either case the evidence now points away from the view that energy use can be restricted (or, equivalently, prices artificially increased) without constraining future growth. Also, out of all countries studied, Canada has yielded some of the most consistent evidence on this, in that studies done under a variety of methods and time periods have regularly found evidence of causality either from energy to GDP or in both directions.

The next section explains some new empirical work that exploits the efficiencies of panel methods and the availability of Canadian data at the provincial level to provide new evidence on the link between energy and growth in Canada.