Global Storm: The Effects of the COVID-19 Pandemic and Responses around the World 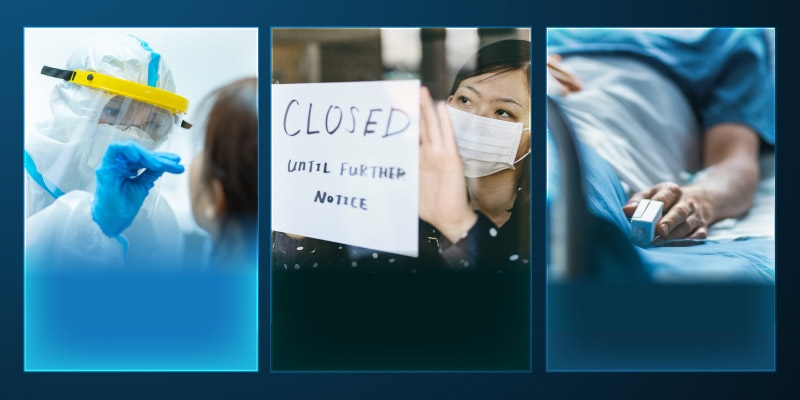 The key event of 2020 was the COVID19 virus and its impacts on health, mortality rates, economies, and government budgets. From the first reports of a pneumonia of unknown origin in Wuhan, China, the COVID19 pandemic grew and spread to countries around the world, becoming a global storm affecting health and economic performance. Indeed, there is some debate amongst public health officials and epidemiologists as to when the virus began spreading from its origin point. By April of 2021, the tally reached 129 million infections and 2.8 million deaths. This study examines the pandemic by comparing the performance of countries in terms of (1) infection rates and mortality rates; (2) the response to dealing with the pandemic in terms of the strategies employed—testing and restrictions; (3) the severity of the economic shock (changes in GDP); and (4) the economic and fiscal response by governments to the economic shock brought about by the pandemic. As well, regression analysis is employed to assess the relationship between key indicators of the effect of the pandemic on the economy and the response of mitigating measures on the pandemic and the economy. The evidence and results in this study offer some early and tentative analysis as to the effects of the pandemic, differences in international impacts and containment efforts, and the economic and fiscal impacts and effectiveness of associated responses.

Within the range of recent modern experience, the COVID19 pandemic is considered unprecedented but it is not the Black Death, which between 1347 and 1351 is estimated to have carried off up to half of the European population—nor to date has it mortality equal to the Spanish Flu, which is estimated to have killed anywhere from 20 to 100 million people. As well, the mortality and morbidity effects have been more concentrated on the elderly rather than the working-age population aged 20 to 65 years, though recent variants seem to be changing this pattern. While past pandemics had dramatic effects on long-term capital-to-labour ratios, wages, and interest rates, the COVID19 pandemic’s long-term effects have yet to emerge though it has had severe short-term effects through its disruption of modern economic production with its highly integrated supply chains and emphasis on personal services and, in the absence of vaccines and effective treatments, the effect upon economies of restrictions designed to limit the spread of the virus.

The pandemic’s initial effects were exceptionally severe across highly developed and economically advanced countries with less-developed countries hit harder later on. While the IMF35 advanced economies account for 18% of the world’s countries, in 2020 they accounted for just over 50% of the 30 worst-hit countries in the world in terms of cases adjusted for population. These same points also apply to mortality from COVID19 given that again the IMF35 advanced economies accounted for 40% of the 30 countries that had the most deaths per million but only 18% of the countries in this study. The fact that the advanced economies have older population distributions than the developing and emerging world may be a factor in the higher toll on advanced countries.

The economic effects of the pandemic saw an estimated drop in world real GDP in 2020 of 4.3%. Again, the IMF35 advanced economies were harder hit, with estimates by early 2021 suggesting a 5.4% fall in real GDP while IMF-defined emerging market and developing economies saw a 2.6% contraction. Unlike major pandemics of distant history, the economic toll of the pandemic resulted more from the toll of measures enacted to control the spread of the disease than the impact of mortality on working-age populations. Lockdowns, quarantines, and travel restrictions have drastically affected sectors such as international travel, the labour-intensive personal services, food and accommodation, tourism, and arts and entertainment as well as disrupted some aspects of the globalized supply chain. However, except early on in the pandemic, stringency does not appear to have been the major factor in curbing the long-term spread of the pandemic or curbing the death toll from COVID19. Other important public-health measures included effective case testing and tracking, mask wearing, and general public compliance with, and enforcement of, rules.

Though all countries experienced the pandemic, its intensity and severity varied substantially across countries as did the economic and fiscal impact. Countries that were heavily affected by the SARS experience in 2004 collectively appear to have had a significantly lower incidence of COVID19 and fewer deaths, suggesting that episode was a valuable learning experience. Nevertheless, application of this lesson appears inconsistent and incomplete based on differences in the number of cases and deaths across this group of countries. In the case of the fiscal response, some countries incurred deficits below what predictive models might suggest while others incurred much larger ones than the pandemic effects might suggest. Moreover, despite expectations that large public sectors might help stabilize economic performance, countries with relatively larger public sectors going into the pandemic do not seem to have experienced smaller drops in economic activity.

In the end, while there are common variables affecting the impact of COVID19 in aggregate across countries, how each country chose to play the cards that were dealt was likely the bigger determinant of outcomes for health and the economy. Learning behaviour was not guaranteed even amongst countries who might have been expected to learn something from their recent past experiences with infectious diseases. Moreover, despite the marvels of instantaneous 21st-century communications and dissemination of information, during the early stages it often seemed as if each nation had to experience its own pandemic before it took the matter seriously.