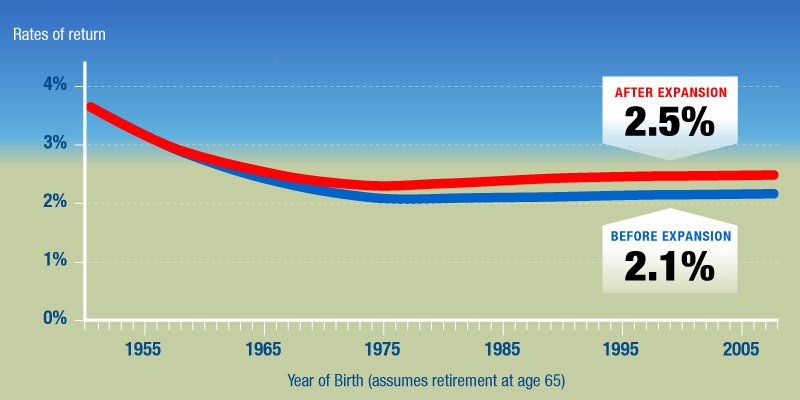 Last month, Canada’s finance ministers announced an “agreement in principle” to expand the Canada Pension Plan (CPP), which will require workers to pay more into the program starting in 2019 in exchange for higher CPP retirement benefits in the future.

As we have noted elsewhere, the case for expanding the CPP is based on either incorrect or highly debatable claims. One of these claims is that the CPP offers a competitive, even a high rate of return for Canadians. A recent Fraser Institute study calculated the rate of return that individual Canadians receive from their CPP contributions in the form of CPP retirement benefits under the existing system and found a meagre return for virtually all working Canadians. This blog updates the rate of return calculations based on the limited details available on the proposed CPP expansion.

Source of the mistaken claim

First, we should clarify the source of the mistaken claim that the CPP provides strong returns. It is driven by people conflating the rate of return on investments made by the CPP Investment Board (CPPIB), which manages the investable funds of the CPP, and the return earned by individual contributors. In reality, the returns of the CPPIB do not in any direct way influence the CPP retirement benefits received by individual Canadian workers. CPP retirement benefits are based on the number of years a person works, their earnings in each year (relative to the maximum under the CPP), and the age at which they retire.

Before presenting the revised calculations, it is important to understand some of the key features of the current CPP. Contributions are made on earnings in excess of the annual exemption ($3,500) up to a maximum amount referred to as the Year’s Maximum Pensionable Earnings (YMPE). The YMPE in 2016 is $54,900, which changes every year with inflation. The combined rate of contribution (tax) is 9.9 per cent of the employee’s eligible earnings. Currently, the maximum annual total contribution to the CPP for an individual worker is approximately $5,089.

Rates of return under the existing CPP program

In order to calculate the rate of return from the CPP for individual Canadians, a number of key assumptions have to be made that are fully detailed in the original study. Under the existing CPP program (that is, before expansion), the rate of return that Canadian workers receive in the form of CPP retirement benefits compared to their contributions varies considerably depending on when the worker was born and retired. For instance, a worker born in 1905 who retired at age 65 in 1970—one of the first years Canadians received CPP benefits—would have enjoyed a 39.1 per cent rate of return after inflation. For Canadians born after 1956, however, the CPP rate of return is a meagre 3.0 per cent or less. The rate of return (adjusted for inflation) declines further to 2.1 per cent for those born after 1971 (see chart below). 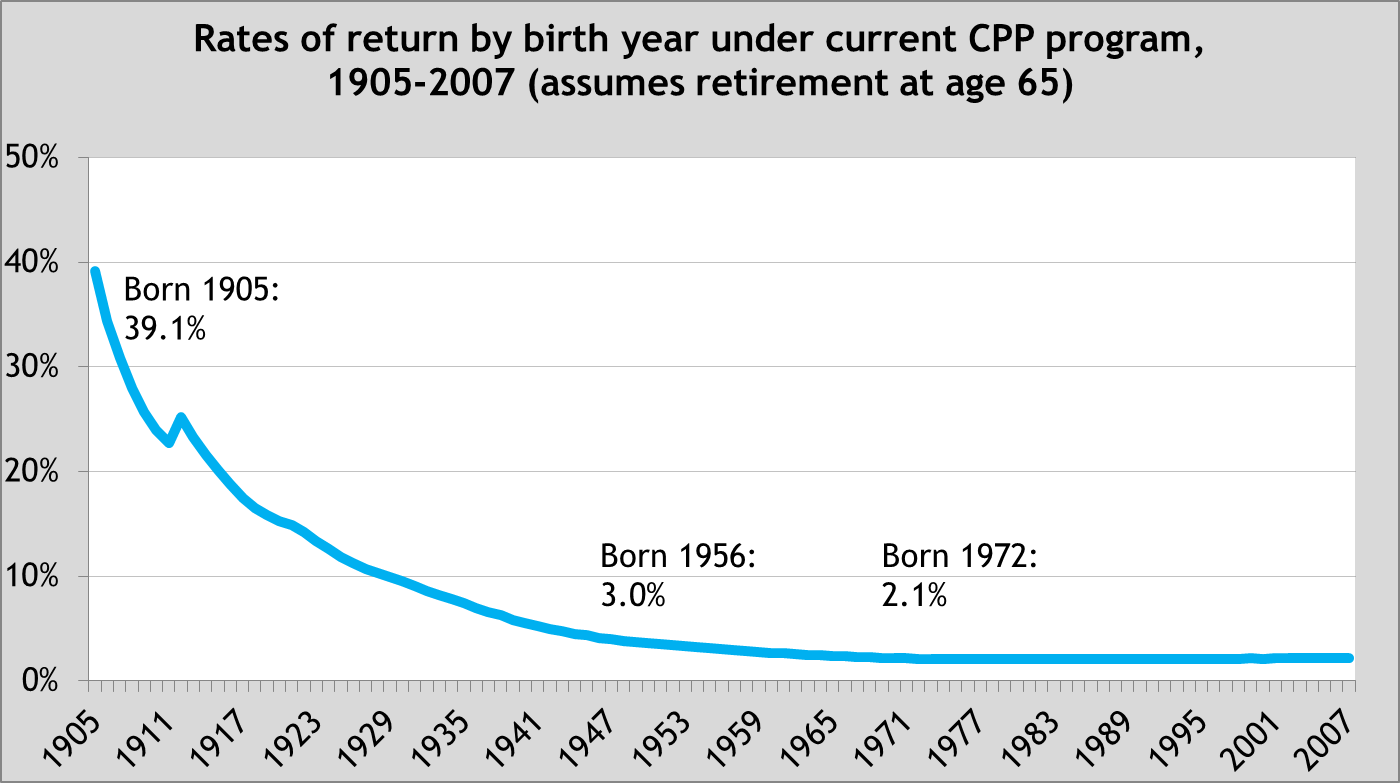 The rates of return declined for two main reasons. First, the contributory period in the CPP’s early years (10 years) was much less than is the case now (47 years). Second, the total contribution rate has increased from 3.6 per cent when the program was started in 1966 to its current level of 9.9 per cent.

Proposed changes to the CPP—what we know

While the details on the proposed changes to the CPP are limited and some technical issues have not yet been clarified, the agreement in principle outlined the following changes:

Rates of return under the expanded CPP program

To calculate the rate of return, we assume that the increase from a replacement rate of 25 per cent to 33 per cent will be phased-in in equal increments from 2019 to 2023. The chart below displays the inflation-adjusted rate of return before and after CPP expansion for individual contributors born from 1950 to 2007. The period ends in 2007 since Canadians born that year will begin contributing to CPP in 2025 (at age 18), making them the first cohort eligible to receive the full increase in CPP retirement benefits. The results displayed are for workers who earn the YMPE and retire at age 65. 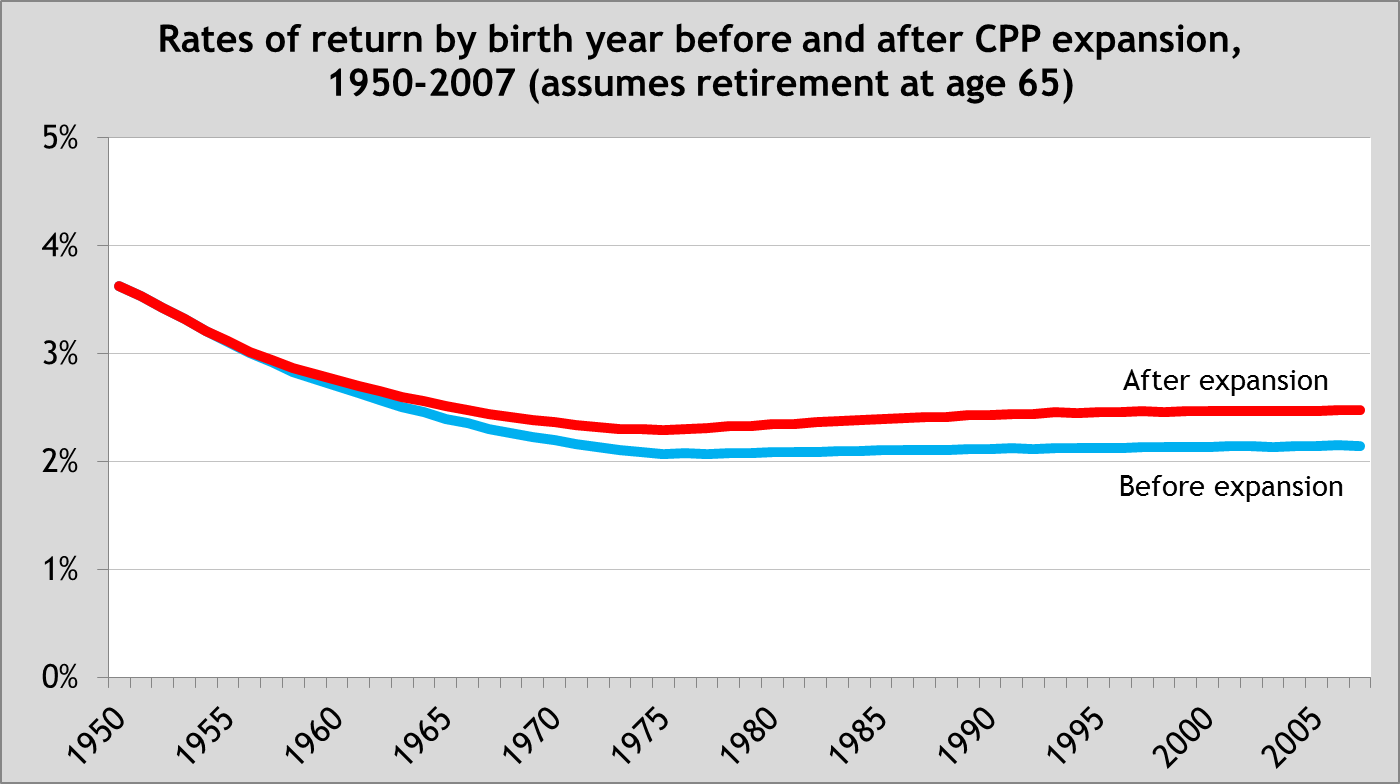 A similar calculation is made for the rate of return for Canadians who will contribute to the CPP up to the maximum income level, 14 per cent above the YMPE. For these individuals, the long-term rate of return is slightly higher: 2.6 per cent for individuals born in 2001 or later.

After taking account of the proposed changes to the CPP, the rate of return for individual Canadians remains meagre. Expansion of the CPP therefore cannot be justified on the basis of offering a strong rate of return to Canadians.