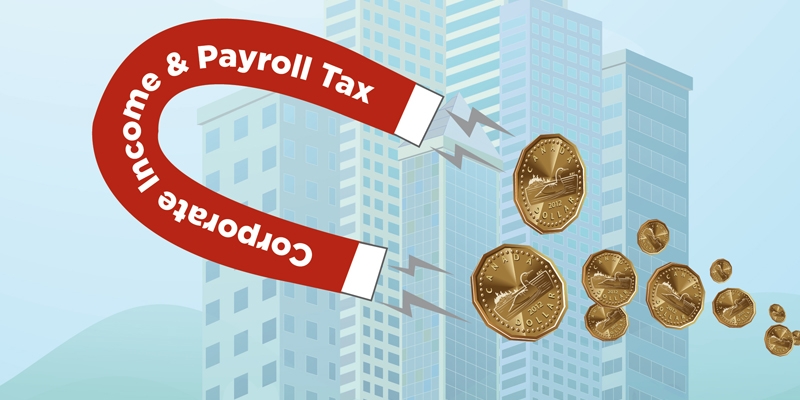 A long held misperception in public policy debates is about who ultimately bears the bur-den of business taxes. The tax incidence is determined by the group that ultimately bears the burden of the tax, which can be different from the entity responsible for collecting and remitting the revenue to government. When it comes to corporate taxes, some simply—and wrongly—assume that corporations pay them in an economic sense, leading to inaccurate claims about the desirability of raising such taxes. And, when it comes to payroll taxes, those levied on employers are assumed—again, incorrectly—to be paid by employers.

The corporate income tax (CIT) is ultimately “paid” for by individuals either as: workers through lower wages; consumers through higher prices; and/or corporate owners (shareholders) through lower profits and returns of investment. While the objective of groups pushing for a higher CIT may be to increase the tax burden on owners of capital, taxes shifted to consumers or workers are clearly not paid by “corporations”, even in the loosest meaning of the term. With respect to payroll taxes, an increase in the total cost of labour is not always and easily absorbed by employers, meaning increased payroll taxes can result in a reduction in compensation (either wages or fringe benefits, or a combination of both). Thus, studying the incidence of corporate income and payroll taxes is important for an informed public-policy debate.

In practice, empirical evidence suggests that the burden of both taxes is partly shifted to workers. This study examines the effect of the statutory (federal and provincial combined) corporate income-tax rate and the employer portion of the payroll tax rate on the wages of Canadian workers.

Economists generally accept that the burden of corporate income and payroll taxes falls to some extent on workers through reduced wages, especially in open economies where capital is mobile and sensitive to tax rates. This can be the result of: [1] short-term adjustments to the level, or more likely, the rate of wage increases at the time when wages are set; and [2] long-term adjustments that reduce labour productivity and thus wages when capital (investment) declines in higher taxed regions or sectors. The empirical analysis in this study focuses on the first explanation and thus most likely captures only part of the impact of such business taxes on wages.

We use a sample of individual-level data from Statistics Canada’s Labour Force Survey (LFS) to measure the effect of corporate income and payroll taxes on the wages of workers over the period from 1998 to 2013, while controlling for individual determinants of wages such as a worker’s age, sex, education, marital status, occupation, and industry. We also control for a worker’s union status and firm size, and use provincial fixed effects, time fixed effects, the unemployment rate, and inflation as variables when relevant.

Our findings show that corporate income and payroll taxes have a negative and statistically significant impact on wages even in the very short term. Specifically, controlling for other factors, we find that a 1% increase in the statutory corporate income-tax rate reduces the (inflation-adjusted) hourly wage rate by between 0.15% and 0.24%, depending on the model specification (these results are for workers employed in the private sector). Based on these results, if the 2012 unweighted average combined corporate income-tax rate for the ten provinces (27.34%) increased by just one percentage point to 28.34%, the national hourly wage rate in the following year would decrease by between $0.13 and $0.20, which translates into annual wages that are lower by between $254 and $390.

For a 1% increase in the employer portion of the payroll tax rate, we also find a negative effect on the hourly wage rate ranging from 0.03% to 0.14%. In dollar terms, this suggests that a one-percentage-point increase in the 2012 unweighted average combined employer-portion payroll tax rate (10.52%) would decrease the national average hourly wage rate in the following year by between $0.07 and $0.31, which translates into annual wages that are lower by between $137 and $605.

In addition, we produce regression analyses including both private- and public-sector workers and sub-samples of private-sector workers grouped by firm size and by union status. In all cases, the results point to a negative and significant effect on the hourly wage rate from increases in corporate income and payroll taxes, albeit by different orders of magnitude.