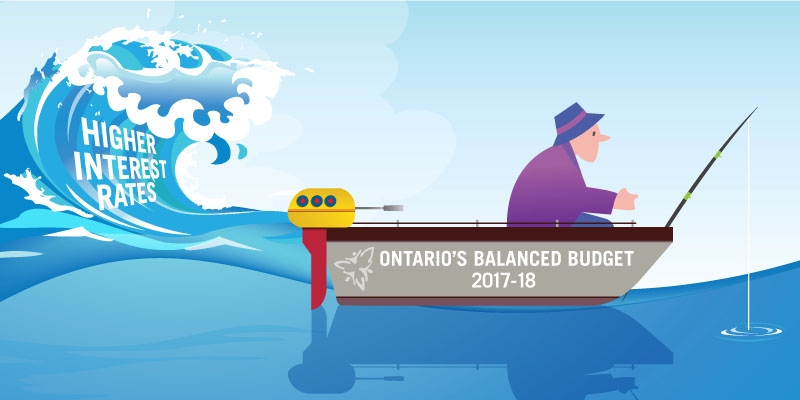 An important fact to consider when assessing the medium-term fiscal plans announced by the federal and provincial governments is that interest rates are at historically low levels. A return to more normal levels would jeopardize promises for balanced budgets or surpluses and increase the proportion of revenues spent on debt interest payments (the “interest bite”). More revenue going to interest payments on the debt means less is available for programs that taxpayers value, such as health care and education, or tax relief.

This study analyzes the budgetary implications of interest rate risks faced by governments, using as examples the short- and medium-term budget plans (2016–17 to 2019–20) of Ontario and Quebec, Canada’s two largest provinces and the most indebted as a share of GDP. The study also provides a background discussion about interest rates and provincial debt maturity structures.

The Quebec government is projecting budget surpluses every year from 2016–17 to 2019–20. The effect of the interest rate shocks is to substantially reduce, though not reverse, the projected surpluses. Under Scenario 1, the surplus falls by $363 million in 2016–17 and by $440 million in 2019–20. In Scenario 2, Quebec’s projected surplus declines by $524 million in 2016–17 and by nearly $1 billion in 2019–20. Quebec’s interest bite would rise from its current value of 10.5 percent in 2015–16 to 10.8 or 11.3 percent in 2017–18 under Scenarios 1 and 2, respect¬ively. Thus, even relatively modest increases in interest rates would have important adverse effects on the short- and medium-term budgets of Ontario and Quebec, and would oblige the provinces to devote a larger share of revenues to financing interest payments on debt.

Provincial governments have been shifting the structure of their debts toward longer terms to maturity. In this way, they are able to postpone the need to refinance their debts at higher interest rates, if rates were to rise. However, in the long run all of the government’s debt eventually matures. The final part of the study explores the budgetary implications of interest rates on provincial debt ris¬ing to 5 percent permanently (with 2 percent price inflation), starting in 2016–17. The primary surplus (revenues minus non-interest spending) would have to be increased each year (forever) by about $3.5 billion in Ontario and by $2.1 billion in Quebec. Otherwise, provincial debt as a share of the economy would rise above the 2016–17 level in each province.

The analysis indicates that a faster-than-expected rise in interest rates toward normal levels could upset Ontario’s already delicate path toward fiscal sustain¬ability. In Quebec, the danger is mitigated to some extent by the government’s commitment to fiscal reforms, announced in its latest budget, to achieve annual surpluses through spending restraint. Should the government waver on its com¬mitment, then the interest rate risk would exacerbate the province’s already very high debt-to-GDP ratio. The bottom line is that governments should not be san¬guine about the current low interest rates when forming their upcoming budgets.