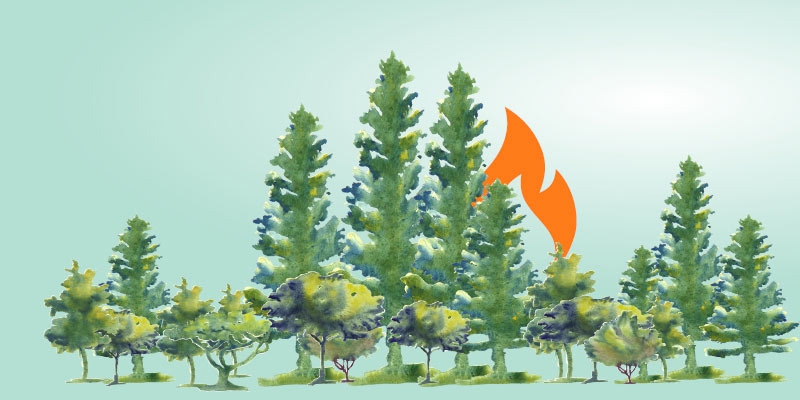 In recent years, media coverage and academic discussions of extreme fire activity have fostered the belief among some Canadians that the country is suffering from a rising trend of destruction from forest fires. During the period of reliable data from 1959 to 2019, it is true that there has been a rising trend in fire activity calculated over the entire six decades. However, a closer inspection of the data show that there was a sharp increase in destruction caused by forest fires in the first half of this period, and a general decline in the second half. The all-time peak of fire activity in 1989 involved some 7.6 million hectares burned, while the most recent national data show only 1.8 million hectares burned in 2019.

This ostensible trend of growing devastation from forest fires is often linked to the broader issue of climate change. For a typical example, a 2019 article in Maclean’s reported: “The forestry experts will also tell you that forest fires—in Australia, California, British Columbia, and Alberta—are bigger, hotter, and more dangerous than fires in the past because of climate change, and we had better get used to them. This is the new reality, and there is reason to worry it will get worse and worse”.

Here is another way to analyze claims about a rising trend of unprecedented forest fires. If we rank the years during this period according to area burned, the six worst years all occur prior to the year 2000. This underscores the point that over the past three decades, there has been a declining trend in numbers of fires and the total area burned at the national level in Canada, a pattern consistent with that observed globally.

If we look only at British Columbia and the Northwest Territories, then recent fire activity really has been unprecedented (during our data period, 1959–2019) and the narrative of increasingly worse fires is correct. Moreover, Alberta’s forest fire loss in 2019 was the second highest on record (with the worst year still being 1981), so this too is arguably consistent with the alarmist narrative. However, these are exceptions to the general pattern. In contrast to the experience in British Columbia, Alberta, and the Northwest Territories, we see the opposite in Manitoba, New Brunswick, and Newfoundland & Labrador: in each of these provinces, peak fire activity occurred several decades ago, while recent activity has been much less. Meanwhile, in Ontario, Quebec, and Saskatchewan, there have been relatively steady levels of forest fire activity over our data period. This combination of outcomes explains why the press can feature stories that accurately portray the situation in some Canadian jurisdictions, even though the narrative does not fit the historical facts at the national level.

This study does not aim to explain trends in Canadian fire activity, but merely to document them. In reality, there are many possible explanations for changing trends in fire activity, including not just temperature and rainfall, but also local fire suppression policies, human-forest interactions, and agricultural practices. However, even though this study does not offer a definitive explanation of the trends in forest fires, the information we present does help frame the discussion about which policy reforms, if any, should be taken. Specifically, the fact that the problematic patterns in fire activity so far only seem to be present in two provinces and the Northwest Territories can rule out simplistic explanations that postulate a single cause (such as climate change). In other words, we know that the factors driving the recent surge in forest fires in some areas must be complex, because any simple cause would not have such disparate impacts across provinces and territories.

Canadian policy makers should be rightly concerned about any surge in forest fires. However, would-be solutions should line up with the facts, and be based on a diagnosis that accounts for the fact that an increase in forest fires has so far only hit a few jurisdictions, while nationally, destruction from forest fires in recent years has not been nearly as bad as it was during the late 1980s and the mid-1990s.