Where Our Students are Educated: Measuring Student Enrolment in Canada 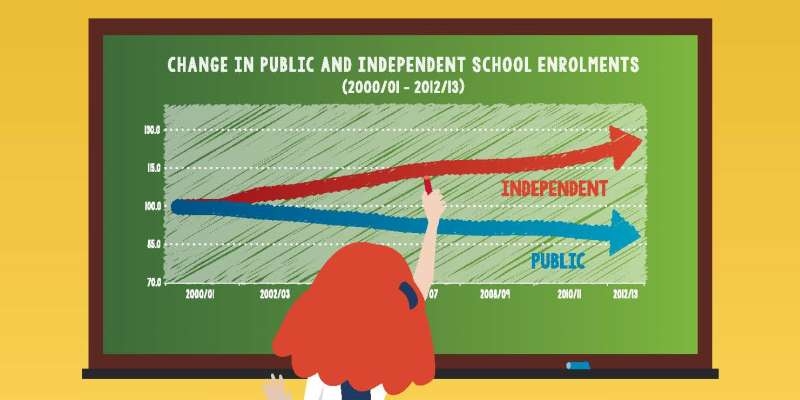 Across Canada, the public school systems remain by far the largest providers of education. In 2012/13, between 87.3 percent (Quebec) and 98.7 percent (New Brunswick) of K–12 students are enrolled in public schools. However, there is a great deal of misunderstanding about school choice and competition within public school systems. Frequently, the large share of enrolment in public schools is equated with a lack of school choice and competition. The reality is more complicated. It is the case that the majority-language public schools—Anglophone in all provinces except Quebec, where it is Francophone—dominate enrolment, educating between 63.1 percent (Ontario) and 98.0 percent (Newfoundland and Labrador) of students.

The general reduction in public school enrolment has been met both with increased enrolment in independent schools and with a larger share of families choosing to home school their children. Quebec and British Columbia saw the largest increases in the share of independent school enrolment, from 9.4 to 12.6 percent in Quebec and from 8.6 to 11.6 percent in British Columbia from 2000/01 to 2012/13.

Critically, the range of parental choice and competition provided in the public education system depends on one’s province (and city). Generally speaking, Alberta offers the greatest degree of school choice in Canada. Apart from having five fully-funded public school choices, although not all are equally accessible, it also provides substantial funding for students wishing to attend independent schools and for parents wishing to educate their children at home. The presence of charter schools provides parents with additional options outside traditional linguistic and religious alternatives offered by public school boards.