From the welfare state to the entitlement state

Ever wonder how Canada's net federal debt reached $671 billion by 2013? Or how net provincial debt among the provinces ended up at $509 billion that same year? Wonder no more. It's partially due to massive subsidies to corporations, government businesses and even consumers that over three decades amounted to $684 billion. 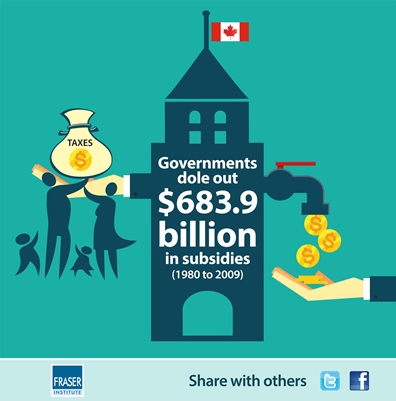 The CRTCs recent reprimand of three Toronto-based X-rated channels for failing to meet the required 35 per cent threshold for Canadian content became fodder for Internet humor; however, Canadian content regulations are no laughing matter for cultural nationalists. Indeed, one of the oldest shibboleths of Canadian public policy is that domestic cultural industries need regulatory protections and taxpayer financial support to promote and sustain the Canadian identity.

Souris Mayor Dave MacDonald recently told the Premier's Council on EI that recent changes to the federal EI program are killing his town.

Unfortunately, Mr. MacDonald did not note that Islanders receive three times as much as they contribute to the EI program. This was a subsidy in 2010 of about $150 million from citizens living elsewhere to people living on PEI.

Equalization, Ontario, and the politics of division

In recent years, evidence has been accumulating that the regional subsidy system is much bigger than it appears on the surface, unsustainable for both Alberta and Ontario and entirely counterproductive because it discourages growth in all recipient provinces.

You might think the federal Conservatives, who added $125-billion to the federal debt since 2008 and will add another $21-billion by the end of March, might be shy about unnecessary expenditures. Alas, thats not the case, as it appears Prime Minister Stephen Harper and his colleagues would rather hand out cash to corporate Canada instead.

In just the first two weeks of January, the prime minister announced another $250-million for the Automotive Innovation Funda federal subsidy program that provides the auto sector with taxpayer cash for research and development.