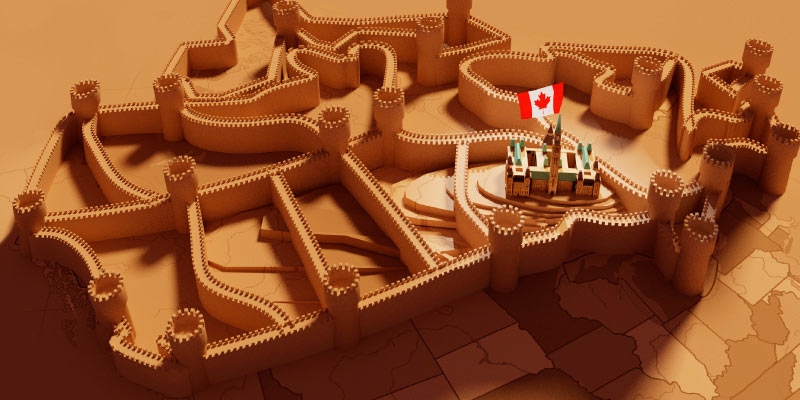 Consumers are best served by firms when the latter are exposed to the threat of competition. Absent the possibility of new firms threatening their incumbent status, established players have less incentive to cut costs and prices and improve services. The threat of entry by competitors disciplines firms in ways that serve consumer welfare but there are many barriers to competition in Canada resulting from government interference and these barriers affect a sizable share of the Canadian economy.

What constitutes barriers to competition? There are some barriers that arise from the features of the goods produced or from external factors (for example, geography, distance, or technological limitations). However, there are many more barriers that are the results of government interference. The federal government limits foreign investments in crucial sectors such as air transportation, telecommunications, and broadcasting. In telecommunications, all firms with more than a 10% market share cannot have more than 20% of the voting shares owned by non-Canadians. Similar rules apply to broadcasters and air carriers. In sectors like air transportation, there are additional prohibitions such as that preventing non-Canadian carriers from providing services between Canadian airports.

These restrictions on foreign activity in Canada are compounded by additional barriers to competition resulting from government monopolies. For example, most provincial governments (including Canada’s two largest provinces, Quebec and Ontario) operate their own alcohol retail services that are shielded from private competition. As another example, Canada Post is a crown corporation with a monopoly on the domestic-letter market. All these state monopolies, to which we can add other crucial sectors such as energy distribution and urban transit, are by definition shielded from competition. Finally, there are other sectors that are shielded from competition by legislation. For example, in many provinces, intercity bus companies are given monopolies on certain profitable routes.

There are, however, two forms of barriers to competition not included in this definition. First, interprovincial barriers to competition are not included. Numerous sectors of activity are protected from competition coming from other provinces. In the case of alcohol, for example, there are important limitations upon moving liquor across provincial borders. This means that, for provinces like Alberta where there is no state monopoly on the retail sale of alcohol, there are additional entry barriers that protect incumbent firms from competition. While many, including the Canadian Senate, deem these barriers to be economically burdensome, they are not easy to quantify and were excluded from our low-bound estimate. Second, the impact of occupational licensing is not included. Most economists qualify occupational licensing as an important source of barriers to entry. However, statistical agencies calculate output on the basis of industrial sectors, not on the basis of professions. As members of the same profession can work in different economic sectors, it is difficult to add the effects of occupational licensing to our calculations above.

Nevertheless, we can produce a cautious high-bound estimate that circumvents these two issues. That high-bound estimate of all restrictions exceeds a third (35%) of the economy. This is a sizable share of the Canadian economy that is protected from competition to some degree. In fact, Canada fares poorly amongst industrialized countries for its support of competition. International surveys of government-erected barriers against competition produced by the Organisation for Economic Co-operation and Development (OECD) show that municipal, provincial, and federal governments in Canada impose some of the most significant barriers to competition in the world. For example, Canada comes in at 48th (out of 62) in the OECD’s foreign direct-investment restrictiveness index, slightly behind the Ukraine and just ahead of Mexico.

Canadian consumers would benefit greatly from the curtailing of these restrictions and provincial and federal governments in Canada should consider removing those barriers to competition and provide a framework that is more amicable to economic growth.