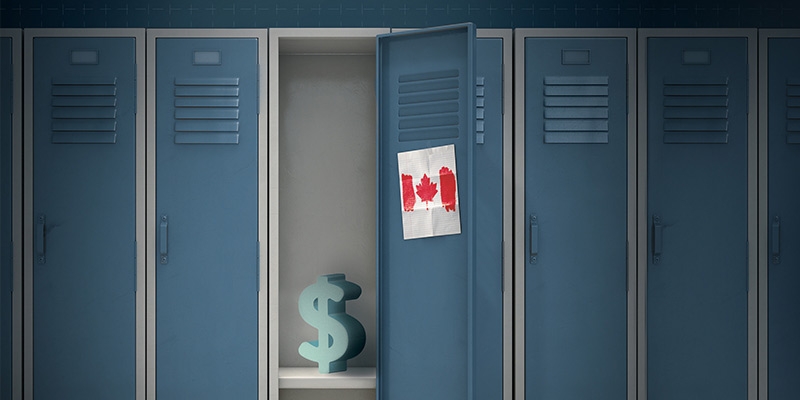 Policymakers in New Brunswick too often take the mistaken view that more spending on education means better results. In reality, the province spends well above the national average on a per-student basis, but performs relatively poorly on student tests. Simply put, we should worry less about how much money we spend, and more about how we spend it.

A recent study found that between 2012/13 and 2016/17 (the latest year of comparable data), nominal spending on public schools in New Brunswick increased by 4.5 per cent, or $62 million. The spending increase occurred despite falling student enrolment—more specifically, the second-steepest decline in enrolment among all provinces, dropping by 3.2 per cent from 2012/13 to 2016/17.

After accounting for inflation and the drop in enrolment, New Brunswick spent $14,768 per student on public education in 2016/17. This is the second-highest level of spending in the country and well above neighbouring Nova Scotia ($13,135) and the national average ($13,315).

This news is particularly noteworthy as a recent study showed that New Brunswick’s average household income per person is significantly below the national average, ranking third-lowest in the country. As a result, a much greater share of income goes to education spending in New Brunswick than in other provinces.

The main driver of the increase in education spending was compensation—salaries, wages and fringe benefits comprised 70.4 per cent of the growth in compensation (reforms in teacher pension plans in 2014 put downward pressure on compensation costs). Capital spending and “other” expenditures also increased over the period.

And yet, despite the province’s high level of per-student spending, New Brunswick performs relatively poorly on standardized tests compared to other provinces. According to PISA results, the gold standard of international testing, New Brunswick’s student performance ranks among the worst in Canada, and test scores have deteriorated or remained unchanged in recent years. For example, in the most recent PISA (2018), the province ranks last in the country in reading, second last in science and fourth-worst in math.

Simply put, New Brunswickers are paying top-dollar for their education system but producing below average results. This suggests the province’s poor student performance is not due to insufficient spending.

New Brunswick Education Minister Dominic Cardy has expressed concern that the province’s education system is “sliding towards crisis” and he’s professed a desire to shake things up.

But if throwing even more money at the problem is unlikely to solve it, what can the provincial government do to help students succeed?

Thankfully, New Brunswick can learn some important lessons from other provinces. British Columbia, for example, spends 19.6 per cent less than New Brunswick per student—$14,768 versus $11,879. In fact, B.C. is the second-lowest spending province after Quebec.

If higher spending means improved student performance, we would expect students in New Brunswick to outperform students in B.C. on standardized tests. But we know this is not the case. Again, according to PISA results, B.C. outperforms New Brunswick in all three PISA subjects—science, reading and math.

So what does B.C. do differently when delivering and financing K-12 education?

In short, B.C. provides a fairly basic public-school system with almost all of the diversity and choice (including religious-based education and alternative educational approaches) provided by independent schools. Unlike New Brunswick, B.C. supports parents choosing independent schools by paying up to half the operating costs per student, which reduces the real cost of tuition (in B.C., 12.9 per cent of students attend independent schools).

Thus far, Minister Cardy has avoided any move toward independent schools. Despite the minister’s pledge to shake things up, current proposals appear centered on working within the public-school system. With overall spending continuing to rise, and test scores continuing to fall, the provincial government must consider other options.

If New Brunswick policymakers want to improve the performance of the province’s students, they should look at other provinces including B.C. for ways to reform education spending and delivery. Clearly, more spending does not guarantee better student results. Instead, the evidence suggests New Brunswick could spend less—and improve student performance—through education reform.