What Are the Economic Costs of Raising Revenue by the Canadian Federal Government? 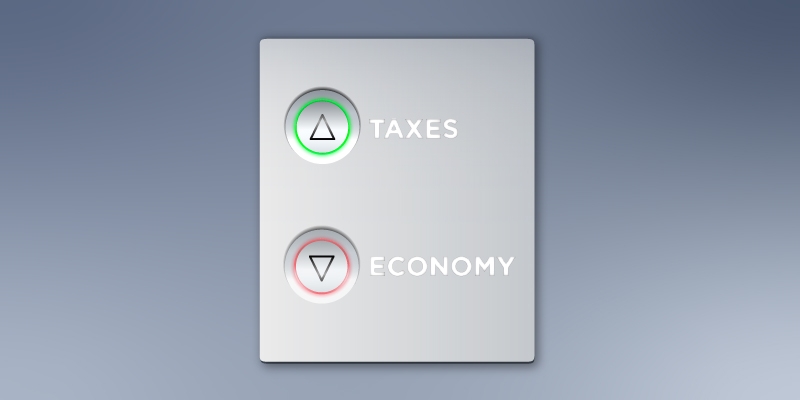 Personal and corporate income taxes are important sources of revenue for the Canadian federal government, accounting for 72 percent of its total tax revenue in 2020–2021. This study investigates the economic costs of raising revenue through the federal personal income tax (PIT) and corporate income tax (CIT). We begin by estimating a measure of the tax sensitivities of the CIT and PIT bases based on data from 1972 to 2019. The econometric model indicates that a one percentage point increase in the federal CIT rate is associated with a 3.36 percent reduction in the CIT base, and a one percentage point increase in the top federal marginal PIT rate is associated with a 1.97 percent decline in the PIT base in the long run. Our estimates of the tax sensitivity of the tax bases are generally consistent with the findings of previous studies, and in particular that the CIT base is more responsive to tax rate changes than the PIT base. We also compare our estimates of the tax sensitivity of the federal PIT and CIT bases with the estimates of the tax sensitives of the provincial tax bases in Dahlby and Ferede (2018). As anticipated, the federal tax bases are much less tax sensitive than the provincial bases, especially in the case of the CIT, because it is easier to shift taxable income or re-allocate investments across provincial boundaries than across international boundaries.

Taxes impose a cost on the economy if they alter taxpayers’ consumption, production, and investment decisions, leading to a less efficient allocation of resources. Raising an additional dollar of tax revenue costs the private sector more than a dollar if the allocation of land, labour, and capital becomes more distorted. The marginal cost of public funds (MCF) is a measure of the cost imposed on the private sector in raising an additional dollar of tax revenue. These measures of the cost of raising revenues at the federal level can be used in cost-benefit analysis of expenditures programs, evaluating tax reforms, and designing federal transfers to the provinces.

We also compare the MCFs for the federal PIT and CIT with the MCFs for provincial MCFs for these taxes. Even though the federal PIT base is less tax sensitive than the provincial PIT bases, the MCFs for the PIT for five provinces were lower than the federal MCF for the PIT in 2020. This arises mainly because the top provincial marginal tax rates are lower than the top federal marginal tax rate. Regarding the CITs, our analysis indicates that the six smallest provinces were on the downward sloping sections of their Laffer curves in 2020. In these provinces, a lower CIT rate would increase total tax revenues to the province in the long run. The four largest provinces are on the positively sloped sections of their CIT Laffer curves and their MCFs bracket the federal MCF.

We illustrate how the MCFs can be used for policy analysis by showing how the federal and provincial MCFs affect the optimal matching grant rate for federal funding of provincial infrastructure. Infrastructure projects which improve labour productivity not only confer benefits to a province’s residents, but they also increase federal revenues which benefit Canadians in all provinces through higher spending on federal programs. However, provinces will tend to under invest in infrastructure projects from a national perspective because they will not consider the benefit to the residents of other provinces from higher federal tax revenues when they conduct a cost-benefit analysis of their spending on infrastructure. This is a rationale for the federal government to provide an incentive for the provinces to spend more on the infrastructure project than they otherwise would through a matching grant. We show that the matching rates should be higher in a province’s MCFs and the ratio of a province’s MCF and to the federal MCF.

The model indicates that the matching rates are higher for the provinces with higher MCFs and when the differential between provincial and federal MCFs is greater.