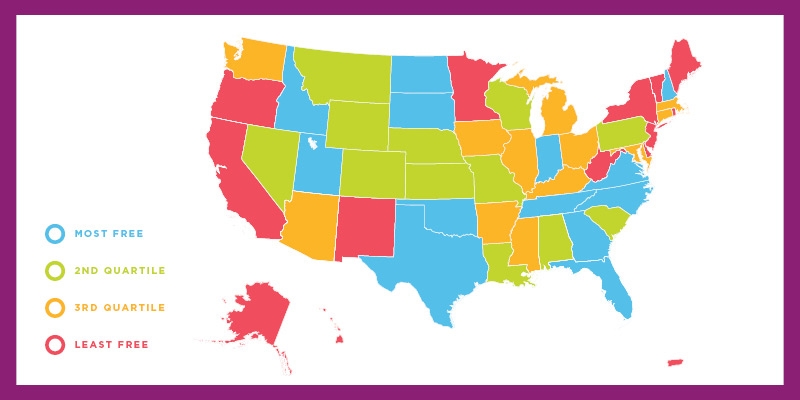 Economic Freedom of North America in 2020

Economic Freedom of North America 2022 is the eighteenth edition of the Fraser Institute’s annual report. This year it measures the extent to which—in 2020, the year with the most recent available comprehensive data—the policies of individual provinces and states were supportive of economic freedom, the ability of individuals to act in the economic sphere free of undue restrictions. There are two indices: one that examines provincial/state and municipal/local governments only and another that includes federal governments as well. The former, our subnational index, is for comparison of individual jurisdictions within the same country. The latter, our all-government index, is for comparison of jurisdictions in different countries.

For the subnational index, Economic Freedom of North America employs 10 variables for the 92 provincial/state governments in Canada, the United States, and Mexico in three areas: 1. Government Spending; 2. Taxes; and 3. Regulation. In the case of the all-government index, we incorporate three additional areas at the federal level from Economic Freedom of the World (EFW): 4. Legal Systems and Property Rights; 5. Sound Money; and 6. Freedom to Trade Internationally; and we expand Area 1 to include government investment (variable 1C in EFW), Area 2 to include top marginal income and payroll tax rates (variable 1Dii in EFW), and Area 3 to include credit market regulation and business regulations (also at the federal level). These additions help capture restrictions on economic freedom that are difficult to measure at the provincial/state and municipal/local level.

Since the most recent data available for the report are from fiscal year 2020 and fiscal years in Canada and the United Sates end earlier than calendar years, the data do not fully capture the fiscal effect on economic freedom of COVID-19 and government responses to it.

The all-government index includes data from Economic Freedom of the World (Gwartney, Lawson, Hall, and Murphy, 2022). These data, available only on the national level, enable better comparisons among Canadian, Mexican, and US subnational jurisdictions that take into account national policies affecting all jurisdictions within each country. Canada and the United States have similar scores in the EFW report; both have typically been among the top 10 nations, though Canada fell out of the top 10 in 2021 and remained out this year. Mexico ranks much lower, at 64th this year; this is an improvement over past years.

The top jurisdiction is New Hampshire at 8.10, followed by Florida (8.05), Utah (8.03), and then Idaho and South Carolina, tied for fourth (8.02). Alberta is the highest ranking Canadian province, tied for 47th place with a score of 7.76. The next highest Canadian province is British Columbia in 51st at 7.70. Alberta had spent seven years at the top of the index but fell out of the top spot in the 2018 report (reflecting 2016 data). It is now in the bottom half of the 92 subnational jurisdictions in the all-government index.

Historically, average economic freedom in all three countries peaked in 2004 at 7.75 then fell steadily to 7.27 in 2011. Canadian provinces saw the smallest decline, only 0.24, whereas the decline in the United States was 0.41 and, in Mexico, 0.59. Average economic freedom in North America had risen slowly to 7.46 by 2017 but still remained below that 2004 peak. (Canada was an outlier in that period, seeing a steady decline since 2014.) Since 2017, average economic freedom has fallen further to 7.31. The vast majority of that decline (80%) occurred in 2020, which reflects the first few months of government response to the COVID-19 pandemic.

For the purpose of comparing jurisdictions within the same country, the subnational indices are the appropriate choice. There is a separate subnational index for each country. In Canada, the most economically free province in 2020 was again Alberta with 6.65, followed by Ontario with 5.55, and Manitoba at 5.31. The least free by far was Quebec at 3.05, following Prince Edward Island at 4.04, and New Brunswick at 4.24.

In the United States, the most economically free state was Florida at 7.94, followed by New Hampshire at 7.84, South Dakota at 7.75, and Texas and Tennessee at 7.66. (Note that since the indexes were calculated separately for each country, the numeric scores on the subnational indices are not directly comparable across countries.) The least-free state was again New York at 4.25, following California at 4.59, Hawaii at 4.65, Vermont at 4.70, and Oregon at 4.92. For the first time, we have made a preliminary attempt to include the US territory of Puerto Rico in the US subnational index. It came in with a score of 2.04. The next lowest score was more than twice as high.

In Mexico, the most economically free state was Michoacán de Ocampo at 5.69. Chihuahua was second at 5.56, followed by Baja California at 5.45. The least free Mexican states were Quintana Roo at 1.83, Campeche at 2.34, and México at 2.71.

In addition to the tables found in chapter 4, our new interactive website at www.freetheworld.com contains all the latest scores and rankings for each of the components of the index as well as historical data on the overall and area scores. The full dataset is also available for download at that same website.

Economic freedom and economic well-being at the subnational level

In addition, economic freedom at the subnational level has generally been found to be positively associated with a variety of measures of the per-capita size of the economy and the growth of the economy as well as various measures of entrepreneurial activity. There are now more than 340 articles by independent researchers examining subnational economic freedom using the data from Economic Freedom of North America. (Appendix C lists some of the most recent ones.) Much of that literature discusses economic growth or entrepreneurship but the list also includes studies of a variety of topics such as income inequality, eminent domain, and labor markets. The vast majority of the results correlate higher levels of economic freedom with positive outcomes, such as economic growth, lower unemployment, reduced poverty, and so on. The results of these studies tend to mirror those found for these same relationships at the country level using the index published in Economic Freedom of the World.

The full data set, including all of the data published in this report as well as data omitted due to limited space, can be downloaded for free at