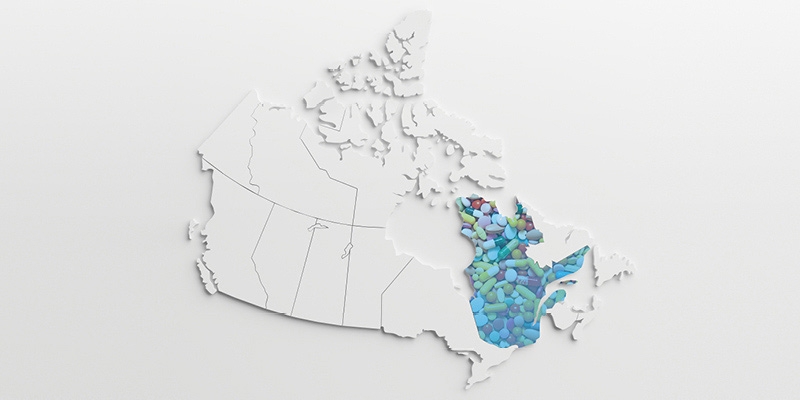 The Quebec general drug insurance program (RGAM) was set up in 1997 with the objective of enabling all Quebecers to have “reasonable and fair access to the medication required by their state of health.” It is a mixed public-private and universal system, unique in Canada. The public plan “provides for a minimum level of coverage for the cost of pharmaceutical services and medications” for people 65 years of age or older and social assistance recipients. It also provides insurance coverage to individuals who are not eligible for a private group insurance plan with an employer.

Private insurers hence continue to play an important role in the drug insurance sector in Quebec. All persons who are eligible for coverage, either as a participant or as a dependent, under an eligible private group insurance plan are mandated to join it. Around 4.7 million people belong to a private group insurance plan, or about 57 percent of Quebec’s population. The coverage of a private group plan must be at least equivalent to that of the public plan and may be expanded to include drugs that are not part of it. This means that they can reimburse more products, more rapidly, at higher prices, and on more permissive terms. In actuality, most private insurance plans choose to provide more generous coverage to their members than the minimum standard set by the public plan.

Overall, while not perfect, the results achieved by the RGAM program in improving access to prescription drugs are generally positive when compared to those of other provinces. It is in Quebec that we now find the most generous coverage when comparing provincial public drug plans across the country. Whereas on average 25.6 percent of all medicines approved by Health Canada between 2008 and 2017 were listed on the drug formularies of other provincial public plans in June 2018, this proportion reached 33.4 percent in Quebec.

Public coverage in Quebec is not only more generous, but drug coverage approval is also faster than elsewhere in the country. Over the last 10 years, it took an average of 477 days for a drug approved by Health Canada to be added to the list of medications covered by the RGAM. In comparison, the average delay was 674 days for all public drug plans in Canada. Not only that, but patients generally have access to a wider range of prescription drugs in Quebec, and prescribers may therefore have more options for them, due to the Quebec government’s less restrictive formulary compared to those in the rest of the country. The list of medications covered by the public plan includes more than 8,000 prescription drug products, the most extensive in the country. In comparison, the number of pharmaceutical products listed on the Ontario Drug Benefit formulary is 4,400.

Researchers who have evaluated the RGAM program confirm that improvements in access to prescriptions drugs have been significant. Indeed, the expanded insurance coverage has facilitated access to the required medications and provided therapeutic benefits to a large portion of the previously uninsured population. Empirical evidence shows that it is first and foremost Quebecers with chronic and generally poorer health conditions who have benefited the most from Quebec’s approach towards universal drug coverage, in terms of improved access to needed medications and better health outcomes.