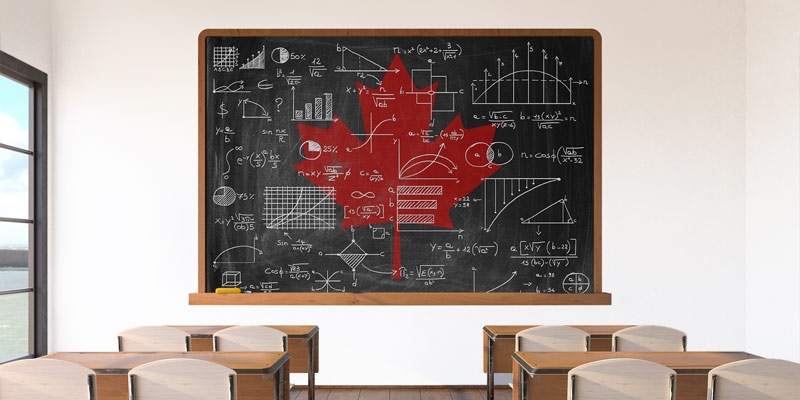 How are Canadian students performing in the strategically important subject of math­ematics? Any useful answer depends on the measures consulted and the standards against which results are compared. Given the exclusive authority over education assigned to Canada’s provincial legislatures, attention must also be given to the relative performance of provincial as well as other national systems. This study reviews the available test results in search of answers to these questions.

Initial and particular attention is given to results from the Programme for International Student Assessment (PISA). Conducted every three years, this is the most extensive and widely accepted measure of academic proficiency among lower secondary school students around the world. Results over the 2003 to 2018 period show a steady decline in Canada’s math scores. Whereas Canada had the fifth highest score among the 37 countries participating in 2003, it occupied twelfth place among the 78 participat­ing jurisdictions in the most recent 2018 assessment. Even so, Canada had the second highest 2018 math score among G7 countries after Japan, and Canadian math scores have remained significantly higher than the OECD average over this fifteen-year period. Internally, PISA scores declined in every province. Declines were steepest in Manitoba, Alberta, and British Columbia respectively, and least severe in Prince Edward Island and Ontario, with the small drop in Quebec’s scores resulting in an essentially flat pro­file. Against the broader decline, Quebec’s relatively stable scores gave it a growing lead over all other provinces.

Canada’s participation in the Trends in International Mathematics and Science Study (TIMSS), the only other international assessment, is limited to students in Alberta, Ontario and Quebec. Assessments are conducted every four years. Results over the 2007 to 2015 period mirrored the PISA findings, with Grade 4 students in Quebec increas­ingly outperforming those in Ontario, who outperformed those in Alberta. Alberta did not participate in the Grade 8 assessment, where Quebec again outperformed Ontario. While the limited participation of provinces is unfortunate, Ontario and Quebec account for 63 percent of Canadian school enrolment, with Alberta bringing the total to three-quarters of total enrolments. Internationally, Quebec placed sixth in the 2015 TIMSS rankings, Ontario eleventh.

Interestingly, while trends from the Pan-Canadian Assessment of Science, Reading and Mathematics (PCAP), our only national achievement measure, do not agree with the PISA and TIMSS findings, the relative performance of the provinces is similar. Assessments are performed on samples of Grade 8 students every three years. Over the 2010 to 2016 period, math scores improved in all provinces except Ontario, where they were flat, and Saskatchewan, where they were hump-shaped. The greatest increases were in Prince Edward Island, Quebec, Nova Scotia, and New Brunswick respectively. Quebec had the highest average scores of all provinces in all three assessments, followed by Ontario and Alberta, conforming to the three top-flight performers in the international assessments.

Each province has its own unique assessment system, differing in design and with regard to grade levels assessed so that results from these measures cannot be compared. Trends within provincial scores were estimated through analyses of reported results in nine provinces. Findings in each of the highest performing PISA and PCAP provinces (Alberta, Ontario and Quebec) identified one or more positive mark trends in secondary or middle school assessments, while most other provinces had flat or negative internal score trajectories.

The study concludes with a closer look at math assessments in the four provinces with the largest school systems. Differences in the scores of students in the French and English language systems in Quebec and Ontario are examined, as are scores in Ontario’s soon to be discontinued Academic and Applied Grade 9 courses. Comparative results from Alberta’s Grade 6 and 9 assessments are considered, together with trends in results from the province’s Grade 12 math examinations. British Columbia’s criterion-referenced results are compared to average scores to highlight interpretive differences, and persis­tent differences in the scores of students attending public and independent schools are considered.

On balance, Canadian math scores are in decline overall, while the relative per­formance of the provinces has remained stable, with Quebec consistently outperforming all other provinces on all available comparative measures, and Ontario and Alberta occu­pying second and third place respectively. Results from the Pan-Canadian assessments paint a partially contradictory picture, showing increasing scores in all provinces except Ontario and Saskatchewan, but with a similar pattern of relative performance across the provinces. The differences in score trends are likely attributable to a focus on measur­ing the achievement of common Canadian curriculum expectations in the PCAP assess­ment, rather than the broader conception of mathematical proficiency underlying the international assessments. Given that the provinces measure math performance against their own curriculum standards, consideration might usefully be given to adopting a broader conceptual framework for the Pan-Canadian assessment similar to those used in international assessments.