As a result of the funding demands of the First World War, Canada’s federal government introduced both a personal and corporate income tax in 1917. The advent of the personal income tax in particular marked a significant shift in federal taxation philosophy.

In the first years of Confederation, it was felt that taxing incomes would detract from Canada’s competitive position as one of the lowest taxed countries in the world. Indeed, it’s worth noting that Canada’s federal personal income tax only came into being once the United States brought in its own income tax in 1913. This post highlights some of the major changes to the federal personal income tax in its first 100 years.

Canada’s federal personal income tax came into effect September 20, 1917 with a 4 per cent tax on all income of single people (unmarried persons and widows or widowers without dependent children) over $2,000. For everyone else, the personal exemption was $3,000. In today’s dollars, the exemptions would be worth approximately $33,000 and $50,000, respectively. To be clear, in today’s dollars, the first federal personal income tax exempted the first $33,000 of income for single people and the first $50,000 for everyone else. For reference, the basic personal exemption for 2016 is $11,474.

For married Canadians with dependents and an annual income greater than $6,000 (roughly $99,500 in today’s dollars), the tax rate ranged from 2 to 22 per cent. However, because of the relatively high dollar exemptions, only between 2 and 8 per cent of individuals had to file tax returns during the initial years of the federal personal income tax.

It was the Second World War that saw the federal personal income tax expand dramatically. There was a flat 20 per cent surtax imposed on all income tax payable by persons other than corporations in 1939 followed by the introduction of a new tax on income known as the National Defence Tax. Further rate increases along with reduced exemptions were introduced in 1942.

While these rates came down after the war, they remained substantially higher than they had been before the war. By 1971, for instance, the average Canadian was subject to much higher average and marginal tax rates than had been the case in 1946. 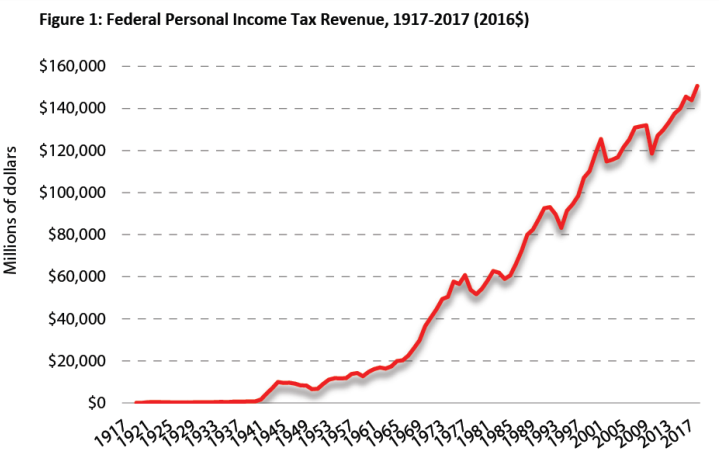 In terms of per-person federal personal income taxes, the burden has increased from roughly $14 per person in 1918 (adjusted for inflation and denoted in 2016 dollars) to roughly $4,120 in 2017, an almost 300-fold increase.

After a century of changing brackets, rates and exemptions, along with periodic reforms designed to broaden the base and lower the rates, the importance of the federal personal income tax as a revenue source has steadily grown as Figures 2 and 3 illustrate. As a share of total federal revenue, the personal income tax has grown from 2.6 per cent of revenue in 1918 to an expected 51 per cent in 2017. Large increases in the share of federal revenues represented by personal income taxes are evident at the beginning of the Second World War and the late 1960s, though a steady increase is generally observed across the entire 100-year history of the tax. 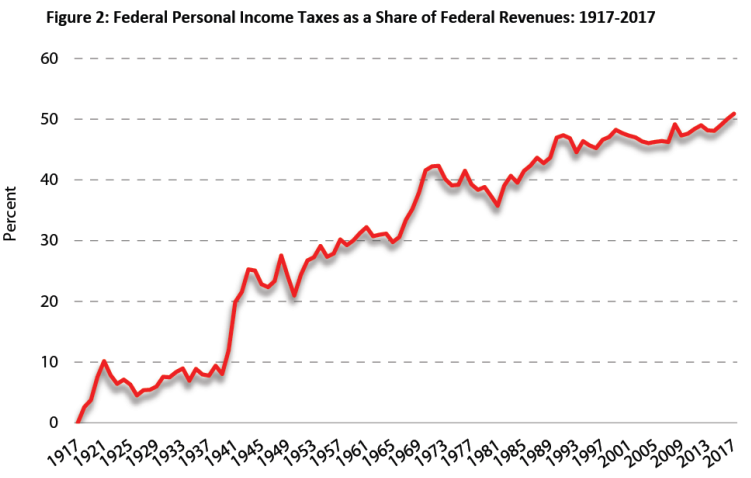 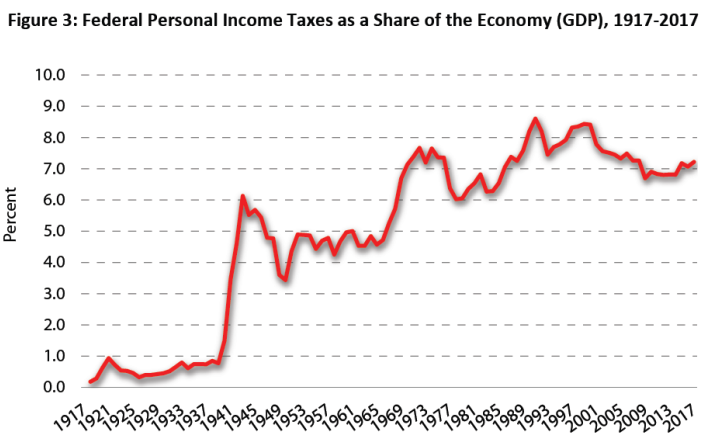 It’s ironic that a tax that was anathema to federal politicians during the first 50 years after Confederation, and that many believe was brought in and sold as a temporary wartime measure, has come to be the dominant source of federal government revenue. Indeed, both its creation and its most dramatic expansion occurred during periods of war. While the late 20th century saw a period of reform that resulted in a reduction in the number brackets, a lowering of rates and a broadening of the base, recent federal government revenue policy has taken the first steps towards both higher rates and more brackets.