Across Ontario, municipalities are beginning budget planning season and the average municipal ratepayer is well-advised to keep an eye on their local councils.

Ontario municipalities have been complaining for some time that they are stretched for resources despite having seen substantial revenue growth.

For example, data from the Financial Information Returns of Ontario municipalities shows that between 2000 and 2014, total municipal revenues doubled from $22.7 billion to $45 billion. The annual average growth rate of total municipal revenues between 2000 and 2014 was 5.1 per cent. Tax revenues grew at an average of 4.6 per cent, government transfer revenue at 6.6 per cent, and the remaining revenues at 5.2 per cent.

Yet such aggregates can seem remote from the average ratepayer’s daily experience. The BMA Management Consulting Group’s annual municipal studies available on many municipal websites offer yet another perspective on the rising municipal tax burden for municipal residential ratepayers by providing comparative data on property taxes paid by single family detached homes. The basis for comparison is a detached three-bedroom single-storey home with 1.5 bathrooms and one-car garage with a total house area of approximately 1,200 square feet on a lot approximately 5,500 square feet. The chart below presents the taxes paid for such a property in 33 major communities (Toronto is divided into four areas due to size and assessment differentials) for the year 2015, with the results ranked from highest to lowest. 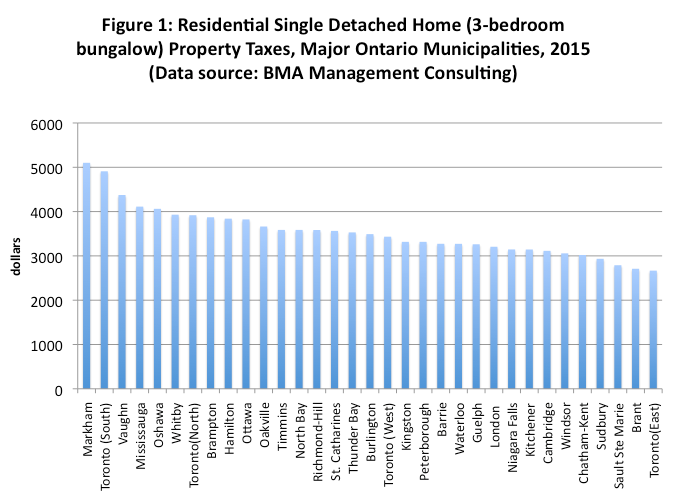 There’s a substantial range in property taxes paid across Ontario for these like properties. In 2015, the municipal tax paid for such a residential property ranged from a low of $2,667 (in Toronto East) to a high of $5,101 in Markham. Nine of the top 10 are in the Greater Golden Horseshoe region, a reflection of the higher property values in this densely populated area. Interestingly, where you live in Toronto—north, south, east, west—helps determine a rather wide difference in property tax paid. The level of taxes varies across municipalities given the value of properties, differences in service levels as well as access to other revenue sources. 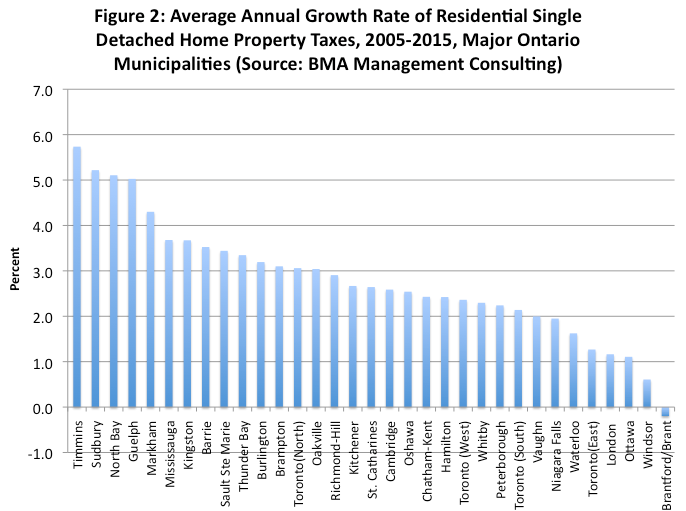 The fastest growing residential municipal property taxes were in Timmins and Sudbury respectively at annual rates of 5.7 per cent and 5.2 per cent. The slowest growth was in Windsor and Brantford/Brant. The average growth rate across these 33 communities was 2.8 per cent. The top 10 growth rates in residential property taxes are dominated by northern Ontario communities—five out of the top 10.

To put this revenue growth in perspective, over the same period, Ontario’s population grew at an average annual rate of 1.1 per cent while real GDP only grew on average at about 1.5 per cent, meaning that real per capita GDP expanded at barely half of one per cent annually.

Over the last 10 years, residential property taxes and water charges at the municipal level in Ontario have on average both grown faster than real per capita income. Municipal ratepayers in Ontario should be wary of local governments claiming they need more.