Many Canadian provinces have expressed a desire to hike their minimum wage to $15 per hour. Alberta has begun the process with incremental increases, Ontario has formally introduced a plan, and B.C.’s new government has mused about the idea.

As we have written many times before, hiking the minimum wage—while likely well-intentioned--will hurt many vulnerable workers by reducing their job opportunities. After all, the Canadian academic evidence has consistently shown that raising the minimum wage leads to fewer employment opportunities for low-skilled workers, which tend to be young people ages 15 to 24.

The latest in a long line of Canadian evidence was released earlier this month. In a comprehensive academic study, University of Waterloo professors Kate Rybczynski and Anindya Sen measure the employment effects of 185 changes to the minimum wage in Canada’s 10 provinces over the period 1981 to 2011. The study controls for a host of factors that may affect employment including changing labour market conditions and the economic business cycle.

The effect on teen employment is not a novel result. Other academic studies have consistently found that minimum wage hikes in Canada reduce employment opportunities among teens and young adults. At the bottom of this page is a list of 20 Canadian studies on the employment effects of minimum wage hikes. This is not a selective list. After an extensive search, this is every Canadian study that has appeared in an academic journal over the past several decades that we could find.

This should not be surprising. Just as consumers tend to buy less of a product if its price increases, employers will hire fewer workers and/or reduce labour costs if government regulations make it more expensive to employ workers without corresponding improvements to workplace productivity. It’s the least-skilled workers—again, often those ages 15 to 24—who lose out on employment opportunities because they tend to be the least productive due to their dearth of experience and skills

A second—and in fact, novel—finding of the study by the University of Waterloo professors is that immigrants (ages 25 to 54) are also negatively affected by minimum wage hikes. Recent immigrants can be a vulnerable group of workers as they attempt to integrate into the Canadian labour market due to challenges with education credentials, struggles with language differences and other problems. According to the study, a growing share of minimum wage workers are recent immigrants (arriving in the last 10 years), with the group making up 19 per cent of Ontario minimum wage workers in 2011.

The study is just the latest Canadian research to show that hiking the minimum wage hurts many low-skilled vulnerable workers. Proponents must confront the evidence and avoid making policy recommendations based on their intention, however well-placed they are. 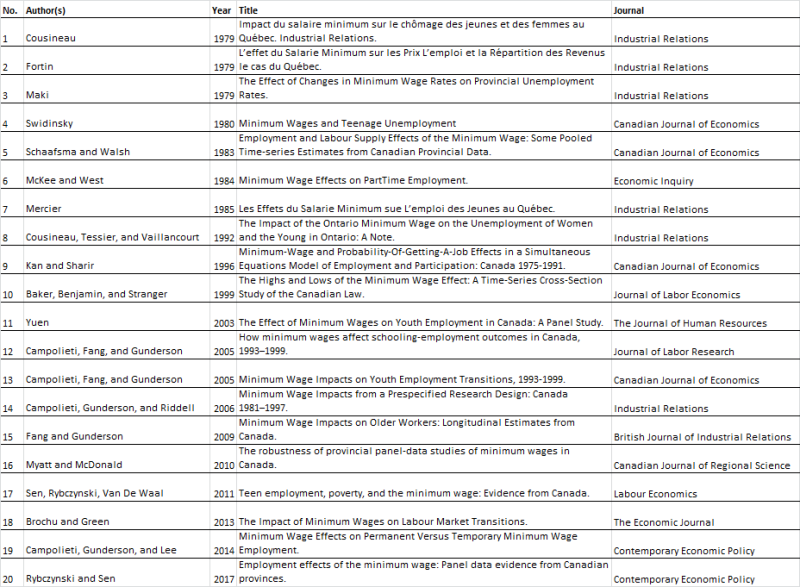