The oil investment exodus out of Canada

A recent report by ARC Financial Corporation notes that investment spending in the oil and gas sector has been reduced to “legacy spending,” with nominal capital expenditures for conventional oil producers as low as it was in the mid-1990s, while capital expenditures in the oilsands sector are driven by several late-stage projects expected to be completed by 2018.

Coming soon after the Kinder Morgan threat of ending the Trans Mountain expansion project, Imperial’s announcement signals the continued flight of capital from what is increasingly seen as an unattractive country for investment. Any effort to restore investment might best begin in areas that deter such investment. According to the Fraser Institute’s Global Petroleum Survey, which shows that Alberta and British Columbia are the least attractive provinces for investment in oil and gas exploration and development in Canada, Alberta’s tax regime was seen as a deterrent by more than 50 per cent of survey respondents. (The chart below spotlights the Policy Perception Index or PPI score of each province.) 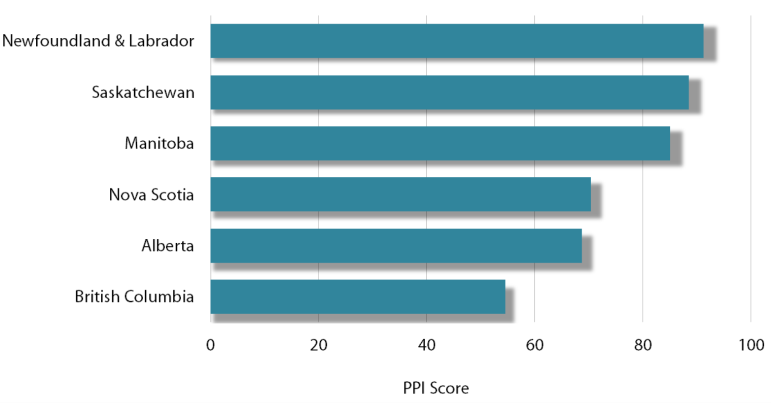 Restoring Alberta’s attractiveness to investment will require tax reforms, and the reestablishment of trust regarding regulatory barriers to operation in the province. The province will also need some help from the federal government, which has imposed an escalating carbon tax, and which has restructured the environmental assessment process in ways will make it more difficult, costly and time-consuming to get projects approved.

With oil prices going up, such reforms are needed now more than ever to allow Alberta’s oil patch to regain some of the ground it’s lost over the last four years of low oil prices and regulatory expansion.