Uneven Recovery: Much of Ontario Still Hasn't Fully Recovered from the 2008 Recession 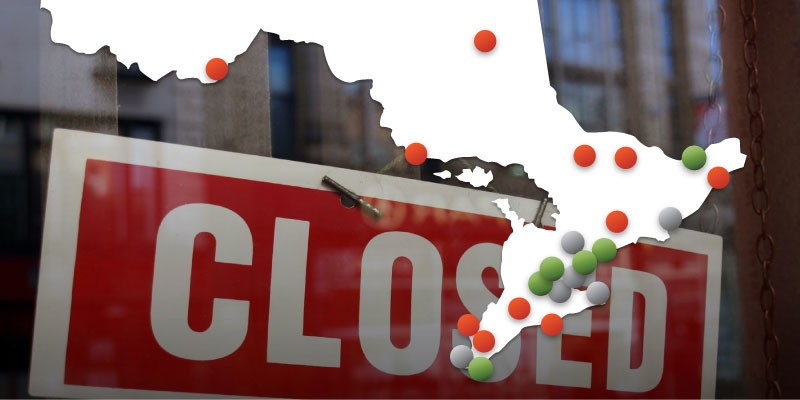 In recent history, Ontario has suffered more than its share of economic pain. From 2003 to 2015, real per-person economic growth in Ontario was roughly half of the rate in the rest of the country at 0.5 percent annually. Thanks to a steep recession and a tepid recovery since (although a recovery that has gained some steam in very recent years), Ontario’s economic performance looks even worse if you consider a somewhat shorter timeframe. From 2008 to 2015, for example, Ontario’s economy grew at an average annual rate of just 0.3 percent.

In order to illustrate the uneven recovery in Ontario, this study examines available economic metrics for the province’s urban areas, which are classified into Census Metropolitan Areas (CMAs) and Census Agglomerations (CAs). The paper pays particular attention to metrics of labour force performance, and especially to rates of job creation in the various urban areas. The CMAs and CAs are grouped in order to highlight common themes, for the most part by geography.

The study finds that most of the province’s job creation took place in its largest urban areas, as well as several metropolitan areas that are closely connected to the Toronto economy. In fact, the Toronto and Ottawa CMAs alone created the equivalent of 98.6 percent of all new net jobs in Ontario between 2008 and 2016. In other words, if the rest of Ontario outside of Toronto and Ottawa is taken as a whole, there has been almost no job creation at all since 2008.

But even excluding the two big engines of job creation, there were large variations among CMAs and CAs, ranging from an 18 percent increase in employment levels in Oshawa to a nearly 33 percent decline in Cornwall.

This paper builds on past analysis from a 2016 Fraser Institute paper that divided Ontario into five major regions or “Solitudes,” and employs a modified version of this framework for grouping the province’s major urban areas that are examined in this paper. The results show that outside of Ottawa and the Greater Golden Horseshoe (including Toronto), major regions of the province have experienced little or no job creation in recent years. All of the CMAs and CAs in Northern and Eastern Ontario (excluding Ottawa) experienced job creation rates below the national and provincial averages between 2008 and 2016. The same is true of nearly all urban areas in Southwestern Ontario. In fact, the only CMAs other than Ottawa and Toronto that enjoyed job creation rates above the national average were Kitchener-Waterloo-Cambridge, Guelph, and Oshawa—all of which are within the Greater Golden Horseshoe.

Examining the data in individual CMAs and CAs is crucial to understanding the province’s economy, since provincial-level data is so dominated by the large Toronto and Ontario CMAs that it is easy to miss the economic pain that persists in various regions and cities of the province, many of which still have not recovered to pre-recession job levels nearly a decade later. This paper shows that while the province’s recovery from the 2008/09 recession can generally be characterized as tepid, there are many areas of the province where it can be better characterized as virtually non-existent.