The Conference Board of Canada last year released a report that compared environmental performance for 16 high-income countries including Canada. Surprisingly, we ranked at or near the bottom on most of the nine indicators assessed. Air pollution was one of the main categories and was examined based on four types of emissions: nitrogen oxide, sulphur oxide, VOCs and particulate matter (〖PM〗_10). Overall, the Conference Board says Canada performed poorly on air quality indicators.

But is this really what the raw data show?

The answer is no. Canada’s air is among the cleanest in the world. The Conference Board’s faulty methodology paints a false picture of reality.

When comparing air quality across different jurisdictions, the absolute amount of emissions matters only insofar as it affects the concentrations in the air we breathe. Most countries have air quality standards that limit ambient pollution concentrations to what they consider safe levels. As a recent Fraser Institute study showed, Canada has some of the most stringent standards in the world, and our air quality has improved over the years to the point that we now consistently meet them. 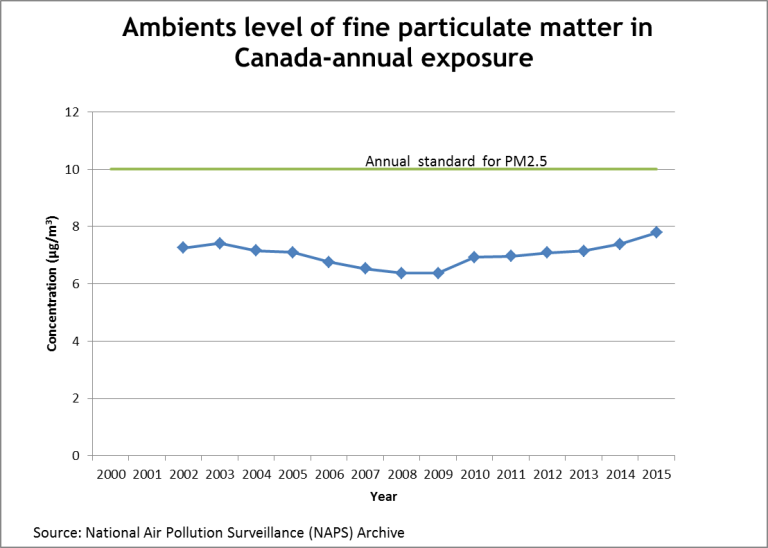 In the table below, a high number is better. As shown, Canada does very well and ranks second after Finland, Australia, Norway and Ireland, which together hold the first rank. All other countries rank below Canada. The EPI’s report ranked Canada 6th overall among the 16 examined countries. 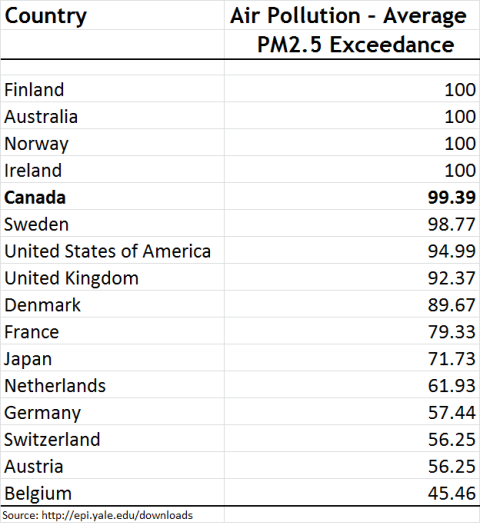 Why then did the Conference Board report put Canada at the bottom?

A few large energy-intensive operations in some provinces skew the emissions per capita upward, but do not translate into actual exposure in urban areas where most people live. Weighting the emissions by the population exposed to ambient concentrations is critical when comparing air quality across different jurisdictions.

The Conference Board does not do this, but it’s what the EPI measure does, by comparing actual exposure in urban areas to agreed-upon air quality standards.

It’s also the approach we took in our Fraser study. This approach shows that Canada is a world leader in clean air, a conclusion that makes sense given the huge improvements in our environment over the past 50 years.

Simply put, the Conference Board report used flawed methodology and yields an inaccurate picture of Canada’s environmental performance. Measured by what really affects peoples’ lives, Canadians deserve high marks for their success in reducing pollution even while pursuing economic growth and resource development.