Most discussions of public debt in Ontario revolve around the provincial government’s net debt, which for 2016-17 is estimated at $317.9 billion and in per capita terms amounts to approximately $22,800.

However, Canada is a federation and multiple tiers of government come with multiple tiers of debt. Indeed, Ontarians must face the fact that their municipalities have also acquired substantial public debts. While per capita municipal debt in Ontario may appear modest relative to provincial debt, it varies greatly across its cities and regions. Where you live matters.

Municipalities are creatures of the provinces and their debt level is regulated and monitored by the provincial Ministry of Municipal Affairs and Housing. Municipalities acquire debt to fund capital projects such as buildings, roads and sewers. Unlike the provincial or federal government, Ontario municipalities are not allowed to acquire debt to fund operating costs. Moreover, no more than 25 per cent of municipal own-source revenues (i.e. taxation and user fees) can be used to service the debt without government approval.

The BMA Municipal Study 2015 provides data on total municipal debt outstanding per capita for 2014, and the numbers are plotted below for 35 major Ontario cities and municipalities including regional governments. 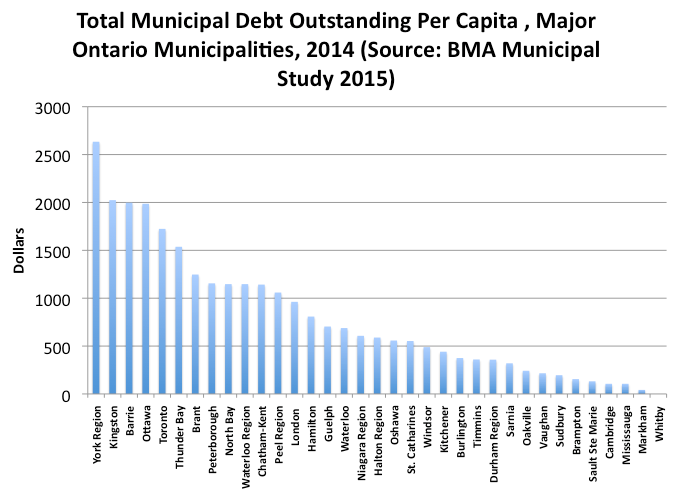 Per capita municipal debt in Ontario in 2014 ranged from a low of zero in Whitby to a high of $2,634 in York Region. On a total debt per capita basis, the most indebted municipal jurisdictions across these major Ontario municipalities are York Region, Kingston, Barrie, Ottawa, Toronto, Thunder Bay, Brant, Peterborough, North Bay, and Waterloo Region. The lowest amounts are found in Whitby, Markham, Mississauga, Cambridge, Sault Ste Marie, Brampton, Sudbury, Vaughn, Oakville and Sarnia.

The reasons for these differences in debt naturally vary due to specific local circumstances facing cities. Some cities may have more deteriorated infrastructure than others, and any upgrading of roads, sewers, bridges and transit facilities is going to be expensive. As well, cities experiencing faster economic and population growth may be more able to rely on an expanding property tax base to finance capital projects. Ontario has indeed been experiencing differential rates of economic growth across its regions.

However, at the same time, some municipal governments are obviously more willing or able to borrow than others. After all, Brampton (Peel Region), Mississauga (Peel Region), Toronto and York Region are all part of the fast growing GTA and yet have vastly different per capita municipal debts respectively at $155, $106, $1,724 and $2,634. To residents of Mississauga and Brampton, one can add the per capita municipal debt for Peel Region at $1,059 but the total still comes substantially below that of either Toronto or York Region.

This all suggests that where you live matters when it comes to municipal debt acquisition. Even after considering differences in local circumstances due to economic growth or infrastructure needs, it remains that political choices may also be a factor in the different per capita municipal debt totals across Ontario cities.