Canada has a business investment problem—deal with it

It’s not as if we needed more bad news about Canada’s economic prospects. But we got it last week with the latest data highlighting the country’s weak business investment.

Statistics Canada released its latest survey results on investment intentions for 2018. The survey, which took place from Sept. 2017 to Jan. 2018, finds that private-sector investment is slated to fall again this year—the fourth consecutive annual decline. This is yet another major sign—in addition to several anecdotes (see here)—that investors are turning their backs on Canada. It’s past time that our governments—both federal and provincial—acknowledge we have a problem.

The survey asked 25,000 private- and public-sector organizations about how much they intend to invest in non-residential capital assets such as buildings, machines and equipment. These types of investments are critical for long-term economic prosperity. When businesses invest in the latest technologies and production techniques, and expand their operations, it spurs economic growth and raises living standards for workers because it makes them more productive, which in turn allows them to command higher incomes.

But as the chart below shows, private-sector investment intentions in 2018 are expected to total $148.4 billion—$50.5 billion lower in nominal terms than four years earlier and $1.7 billion below the 2017 level. This year, a 1.1 per cent annual drop is expected. 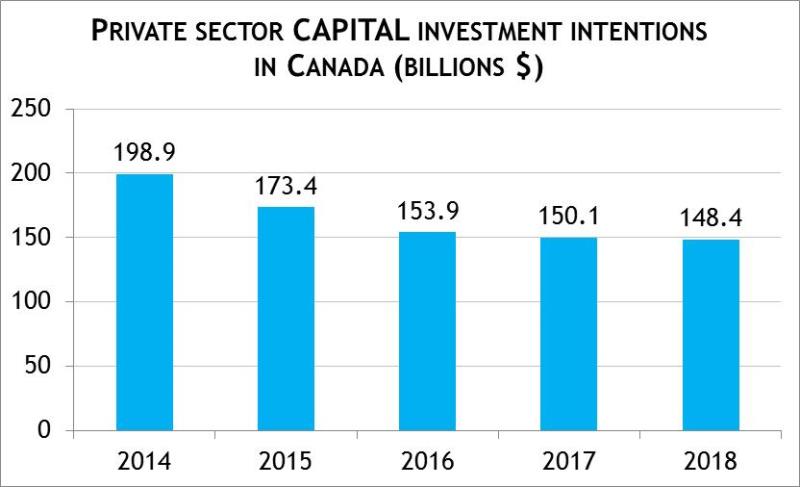 None of this should surprise policymakers since the writing has been on the wall for years. In a recent analysis, Statistics Canada former chief economic analyst found that Canada has the second lowest level of business investment (as a share of GDP) among a group of 17 industrialized countries.

Yes, this period of declining and relatively weak business investment followed a drop in commodity prices. But it has also coincided with a marked deterioration in Canada’s investment attractiveness. Consider that a recent survey of business leaders found 64 per cent thought Canada’s investment climate had worsened in the last five years, owing partly to the growth in the tax and regulatory burden.

Indeed, Ottawa and several provinces have raised tax rates on personal income, corporate income and payroll. They have introduced new regulations on carbon, resource projects and labour. And have generally increased the cost of doing business through higher minimum wages and energy costs. The cumulative effect of such policies, along with Ottawa’s strong anti-business rhetoric, has struck a harsh blow to Canada’s investment climate.

And competitive pressures from the U.S. due to tax and regulatory reform, along with looming uncertainty about market access given NAFTA renegotiations, stand to exacerbate these poor policy choices at home.

They say acknowledging a problem is the first step to solving it. But we’re past that. Canadian governments should prioritize policies that improve our investment climate.