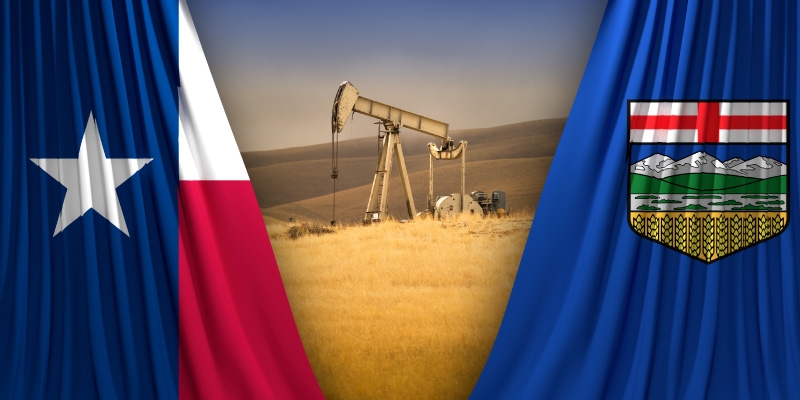 Prior to the recent fall in energy prices, the economies of Alberta and Texas enjoyed prolonged economic booms.

The booms began in earnest in 2004, when real economic growth in the two jurisdictions reached approximately 5 percent. Although there have been significant fluctuations in the years since, both jurisdictions generally enjoyed enviable economic performance between 2004 and 2014.

Although both Alberta and Texas both experienced prolonged booms between the start of the energy price rally in 2004 and the downturn in com­modity prices starting in late 2014, there are important differences between the two jurisdictions’ economic experiences both during the years of the boom itself and in very recent years since energy prices fell.

This paper examines the similarities and differences between the two jurisdictions’ experience in recent years, both in terms of overall economic performance and in terms of successful management of public finances by their governments.

We find that Texas enjoyed slightly faster growth in terms of gross domestic product per capita, while Alberta produced a slightly faster rate of job creation. Each jurisdiction has some metrics on which it outperformed the other but, on the whole, we conclude that the two jurisdictions enjoyed comparably strong overall economic performance.

By contrast, we find that there was a marked difference between Alberta and Texas in terms of how successfully their governments managed public finances during the 2004–2014 period. Program spending per person in Alberta increased by 49 percent during this timeframe, compared to 37.3 percent in Texas. Further, public sector employment growth was approxi­mately twice as rapid in Alberta (2.6 percent) as in Texas (1.2 percent).

The absence of spending discipline in Alberta led to a string of budget deficits, something which did not occur in Texas. As a result, Alberta saw significant erosion in its financial position during this period. In 2006/07, Alberta held net assets representing 12.4 percent of provincial GDP. By 2013/14, provincial net assets had declined to 2.9 percent of GDP. By contrast, Texas saw very little change in its financial asset position during this period.

Problematically, this decline in Alberta’s assets was occurring during a period when commodity prices and provincial resource revenue were gener­ally high. In this report, we document the extent to which these developments put the province in a precarious financial position, such that when energy prices did fall, the province’s budget deficit ballooned and its pace of asset erosion increased quickly. The province will this year become a net debtor for the first time since 2000/2001, and is projected to see a rapid run-up in debt over the next several years. By contrast, Texas—thanks largely to more prudent fiscal management during the boom years—faces no similar run-up in debt and generally brighter fiscal prospects.

Although Alberta’s economy is much more diversified than some car­toonish descriptions of the province as a “petro state” suggest, the province nonetheless relies heavily on its energy sector as a major driver of economic growth. This means Alberta is more prone to pronounced economic booms and slumps than most other jurisdictions.

This feature of the Albertan economy makes it especially important for governments to manage public finances cautiously and prudently during good economic times in preparation for revenue dips and other challenges. The evidence presented here shows that successive Alberta governments did not meet this test during the recent boom.

Alberta and Texas are now on very different fiscal trajectories, as Texas’ financial position is comparatively strong while Alberta faces a potentially costly and economically damaging run-up in debt. One can hope that when Alberta’s economy does recover and begins to grow strongly again, policy­makers will have learned the lesson from this energy price cycle and will manage the province’s finances more prudently during good times, in order to avoid painful fiscal consequences in the future similar to those the prov­ince is confronting today.