A recent Fraser Institute study found that Canadian governments have racked up a considerable amount of new debt since 2007/08.

So the question is: what level of government is responsible for most of the new debt?

The chart below displays federal and total provincial net debt from 2007/08 to 2015/16. Although federal debt is 34 per cent higher today than in 2007/08 (growing from $516 billion to $692 billion), the level began to stabilize in 2012/13. Total provincial debt, on the other hand, has steadily increased over the entire period, growing by 87 per cent (from $318 billion to $592 billion). In other words, total provincial government debt is growing at a much faster pace than federal debt. 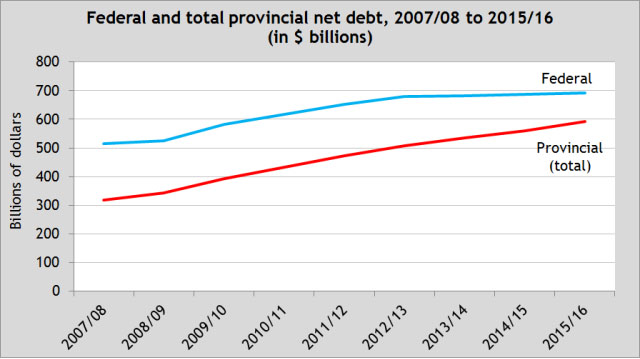 Interestingly, more than half of new provincial government debt since 2007/08 comes from a single province: Ontario, where net debt nearly doubled from $157 billion to $298 billion. Only three of the 10 provinces saw government debt grow at a slower rate than the federal government (Nova Scotia, Saskatchewan, and Newfoundland and Labrador).

That is not to say the federal government’s recent record is a model for the provinces to emulate. However, provincial governments generally, and Ontario in particular, have allowed debt to accumulate at a more rapid rate.

As we approach budget season and governments begin to unveil their tax and spending plans for the future, all governments in Canada should take steps to rein in debt given the adverse short- and long-term economic consequences.