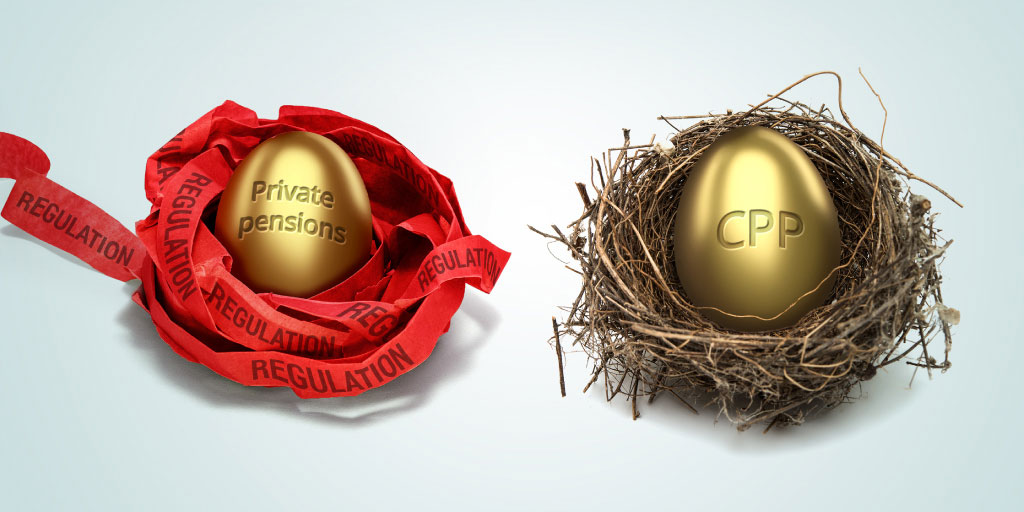 In 2016, in fulfillment of a campaign promise, the Trudeau government reached an agreement with the provinces to expand the Canada Pension Plan. Consequently, mandatory CPP contributions from working Canadians will increase steadily between January 2019 and 2025.

Expansion proponents have used many faulty claims to justify the changes including the false claim that the CPP is a lower-cost pension due to its greater efficiency. They argue that the CPP’s large assets allow plan administrators to keep costs of running the plan down, relative to other pensions.

But that argument ignores a key reason why the CPP may be able to keep costs comparatively low. The CPP is exempt from many of the regulations and rules governing private pension plans in Canada. These regulations can increase the transparency and accountability of private plans, but also inevitably increase costs for plan administrators. By avoiding the regulations, the CPP avoids these additional costs. That’s not necessarily a good thing for Canadians because it means less transparency and accountability.

In addition, the CPP’s makeup and offerings to beneficiaries are quite rigid compared to private plans, which tend to offer more options and flexibility (more on that in a moment). This flexibility comes at an additional cost. Put simply, the lax regulatory burden and vanilla nature of the CPP give it an artificial cost-advantage over other pensions and individual registered accounts such as RRSPs and TFSAs.

To help clarify, consider some examples of how the regulations governing the CPP differ from other pensions.

Private plans are subject to more disclosure and customer-related regulations than the CPP. For instance, they must provide regular financial statements to clients and comply with anti-money laundering laws—sometimes known as “Know Your Customer” laws. The CPP does not.

Because the CPP is a federally-constituted entity (legally speaking), it’s not subject to any provincial regulations. Nor is it subject to the jurisdiction of any regulations by industry organizations. Private plans, depending on the province, incur filing and administrative fees from constantly filing reports with their provincial pension superintendent. Further, there are almost no laws allowing for the CPP to be sued for bad governance. So where the CPP enjoys substantial cost-savings from not having to anticipate or defend against any liabilities, private pension plans are under constant threat of litigation and must account for that.

On top of dealing with extra regulations, private plans have several characteristics and options the CPP does not, which also affect costs. Notably, private pensions must account for transferability from one plan to another whereas CPP contributions are not transferable. Moreover, for private plans there are different rules governing pension contribution rates, payouts and early withdrawal provisions. These options create more uncertainty for private plan administrators and require more planning and safeguards, and therefore costs.

And whereas RRSPs, TFSAs and some defined contribu¬tion pension plans allow contributors to choose where funds are invested, the CPP offers no such choice. All invested contributions to the CPP are managed by the CPP Investment Board, which decides where funds are invested. With more rigid options, the CPP’s lack of offerings and flexibility simplifies the administrative costs of running the plan.

Finally, thanks to the vast number of CPP contributors, the CPP has a diversified set of contributors and payees. A private pension plan may have a skewed demographic of employee age profiles, which can pose unique challenges the CPP does not face.