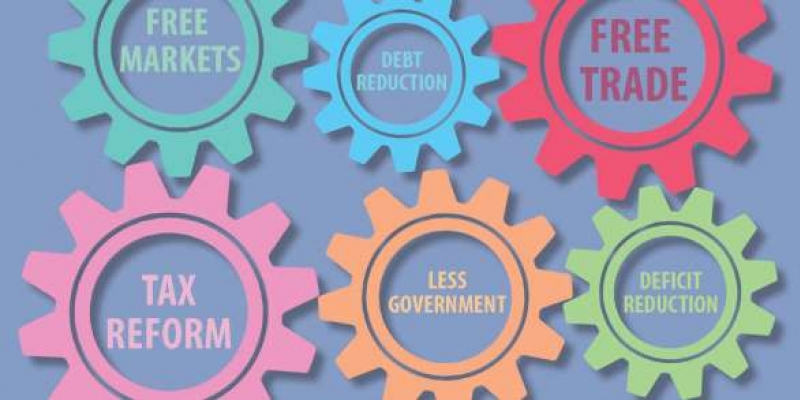 Many studies have shown that economic freedom is a major determinant of countries’ living standards, economic growth, and other indicators of social and economic well-being. This paper is an effort to understand the determinants of economic freedom in individual countries and through time through the use of the theories of public choice and of limits to its success.

The paper postulates that the level of economic freedom is the product of fights between politicians on one side, who attempt to buy votes by providing interest groups with special benefits through subsidies, regulation, and tax-breaks, and politicians on the other side, who appeal for votes by making the public aware of the cost of the policies advocated by their opponents. To quell opposition to vote-buying policies, their originators often hide their costs by the use of deficit financing. Inflation caused by the deficit financing often leads to new opportunities for vote-buying policies from interest groups suffering from the consequences of the inflation.

In well-functioning democracies, the fight between the proponents and opponents of policies that reduce economic freedom leads to political standoffs and equilibrium levels of economic freedom. Such equilibria are determined by the countries’ history, culture, and institutions and influenced by the extent to which media keep the public informed about vote-buying policies and their costs.

The empirical part of this study examines the history of economic freedom in the light of these determinants in a number of countries: high-income democracies, transitional economies, and southern European countries in crisis. Some countries were found to have been in equilibrium levels of economic freedom for prolonged periods. Changes from these levels were associated with changes in the economic paradigm and the efforts of strong political leaders acting on them. Some countries experienced slow changes in economic freedom while others had quick changes imposed on them by external forces like international organizations and financial institutions.

One of the implications of this analysis is that fights between political parties are a sign of a well-functioning democracy that should be encouraged rather than deplored. The study also implies that parties engaged in these fights should be required to support their policy proposals by benefit/cost calculations reviewed by independent agents; that media should be encouraged to inform voters about party platforms in the run-up to elections; that prohibitions against deficit financing be created and enforced, and that all new regulations be approved by legislatures rather than adopted by autonomous regulatory authorities.