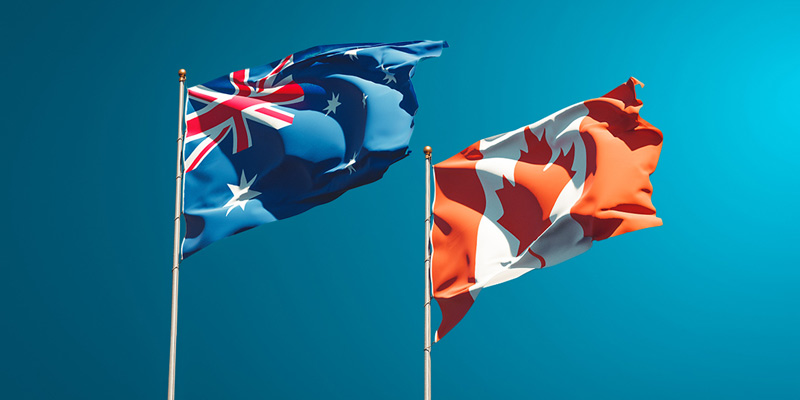 Australia and Canada have much in common, perhaps more so than any other two industrialized countries. They share a common political and cultural heritage and similar institutions such as a federal system of government and bicameral parliament. They are similar in population, industry composition and their status as relatively open commodity-exporting countries.

But they part company on two key economic indicators—what economists call long-run “productivity performance” and growth in living standards. Productivity remains a critically important economic indicator, reflecting the ability of a jurisdiction’s population to transform raw materials, work effort and ingenuity into useable goods and services. On both measures, Australia has enjoyed a long period of outperformance that raises questions about why Canada has not been able to achieve similar outcomes.

Based on internationally comparable data, Australia currently enjoys a four percentage-point advantage over Canada in both the level of productivity—that is, the level of goods and services produced (output produced per hour worked)—and average income, as measured by per-person gross domestic product (GDP). Put differently, when compared with the United States, Canada’s average living standard (measured in per-person income after adjusting for inflation) is 78 per cent versus Australia’s 82 per cent.

In fact, since 1990 Australia’s per-person income growth has exceeded Canada’s by half a percentage point (on average) while income growth has exceeded Canada’s by 0.8 percentage points. These may seem like small differences but they add up to substantial differences over time. For example, average per-person income in Canada is now roughly US$51,000 versus US$54,000 in Australia.

What explains this long-term outperformance?

Australia benefited from extensive economic reforms beginning in the early 1980s and continuing through the 1990s that opened up the economy to foreign trade and investment, deregulated markets for goods and financial services, privatized state-owned businesses and introduced sweeping competition reforms.

Governments in Canada undertook similar reforms in the 1990s, but without the same impact on productivity growth. Some analysts attributed Canada’s weak productivity growth (relative to the U.S.) to rising commodity prices and an appreciation in the Canadian dollar. However, Australia faced much the same shock to commodity prices and its exchange rate over the same period. Indeed, in 2011, Australia’s exchange rate rose to its highest level since being floated in 1983.

Put simply, the Australian economy has outperformed Canada because of investment. At least until very recently, Australia has sustained a much higher level of investment as a share of its economy. Investment spending is key to new innovations and technologies that drive productivity growth. Consider that between 1995 and 2020, Australia‘s total investment represented 26 per cent as a share of the economy compared to just 22 per cent in Canada.

Clearly, the key role of investment spending in the outperformance of the Australian economy suggests that Canadian policymakers must pay more attention to policies that inhibit business investment.