The spring 2016 Economic and Fiscal Outlook report of Ontario’s Financial Accountability Office (FAO) received notable attention given its projection that as a result of transit infrastructure spending, Ontario’s net debt would increase by approximately $54 billion to reach $350 billion by 2020-21. What received somewhat less attention were the more detailed expenditure and revenue projections made by the FAO and what they tell us about the Ontario government’s finances.

On the expenditure side, the fastest growing item will be interest on the debt, which is forecast to rise from $10.6 to $13.8 billion—for an annual average growth rate of five per cent. The slowest growing items at 1.3 and 1.9 per cent annually are post-secondary education and justice. The single largest expenditure item is health and it is expected to grow from $50 billion to $57.8 billion at 2.6 per cent annually—just a bit below the growth rate for total expenditure. As a result, health’s share of total expenditure is expected to fall slightly from 39 to 38 per cent, which may or may not materialize given the upward pressure on health spending from an aging population. 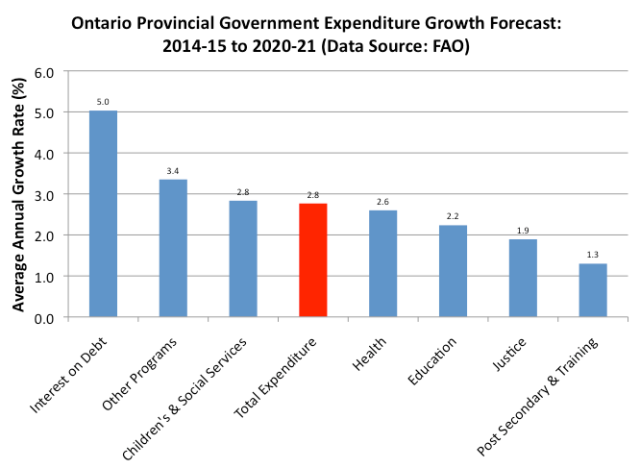 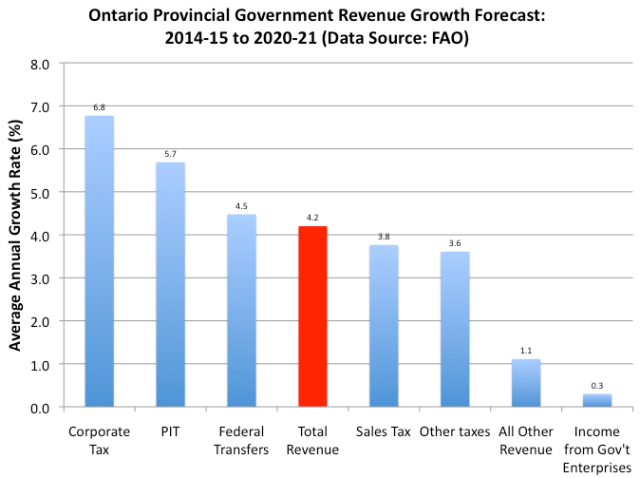 What is truly unfortunate is the heavy reliance on forecasts of rising personal and corporate income tax revenues, which have serious economic incentive effects, to narrow the gap between revenues and expenditures. Moreover, despite revenues growing much faster than expenditures, by 2020-21, the Ontario government is sadly still anticipated to have an operating deficit of $1.7 billion.