While the Conference Board expects Canada’s real GDP to grow at more than 2 per cent this year, New Brunswick is slated to only grow by 1.5 per cent in 2017 and 1.1 per cent in 2018.

Low growth, combined with rapidly aging demographics that strain the province’s health-care system, means the fiscal spillover in New Brunswick is dire. Figures from the Federal Fiscal Reference Tables combined with the 2017-18 New Brunswick budget show that since the 2007-08 fiscal year, New Brunswick has run nine consecutive deficits and is expected to run a $192 million deficit for 2017-18.

In 2007-08, provincial government expenditures were approximately $6.9 billion and revenues $7.2 billion resulting in a surplus of $241 million. For the fiscal year 2017-18, total expenditures are expected to be $9.4 billion and total revenues $9.2 billion for a deficit of $192 million.

Since 2007-08, nearly $4 billion worth of deficits have been added to the province’s books with the net debt rising from $7.2 billion to an anticipated $14.4 billion by 2017-18. Indeed, as the accompanying chart illustrates, the trajectory of the province’s net debt has been quite steep as of late. Moreover, its net debt to GDP ratio has now exceeded 40 per cent—up from 25 per cent in 2007-08. 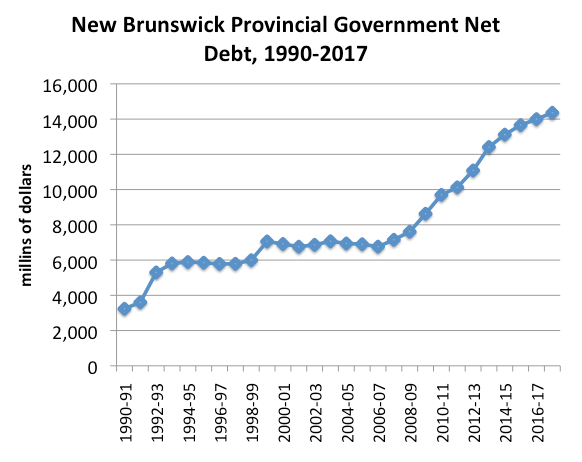 Despite assurances from the provincial finance minister during the release of the 2017-18 budget that New Brunswick is on track to eliminate the deficit by 2020-21, tackling the deficit is up against the political reality of an election expected within a year. New Brunswick Premier Brian Gallant’s cabinet shuffle in early September announced a number of regional ministers. Indeed, Premier Gallant stated that the previous informal system of regional ministers was being formalized with the choice of five ministers who would “advocate” for their regions.

This does not sound like a concerted effort to address the province’s finances. This likely means more rather than less upward pressure on spending.