In a fiscal feat that bucked the national trend, Nova Scotia this spring presented a budget that with total spending of $10.1 billion, projected a small surplus of $17.1 million for the 2016-17 fiscal year and subsequent surpluses until 2019-20.  As a share of GDP, the surplus is tiny—well under one per cent—but it is a start.

How has Nova Scotia managed to do this?

A review of long-term data from a new provincial fiscal data set compiled by Ron Kneebone and Margarita Wilkins for the period 1980-81 to 2013-14 suggests that Nova Scotia’s public finances are finally on the path to budget balance. However, the fiscal policy choices that have been made to date are not necessarily the best ones so Nova Scotia is not out of the woods yet.

The chart below plots Nova Scotia’s provincial government revenues and expenditures on a per person basis (in 2013 dollars) starting from the early 1980s.  While there have been many years with substantial deficits, the linear trend lines that have been fitted to the data show a convergence over time. Nova Scotia has definitely been closing the gap. 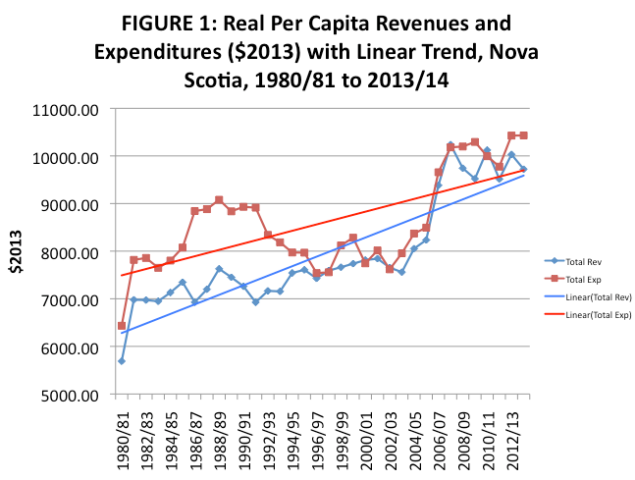 However, Nova Scotia’s long-term fiscal solution has involved revenues growing faster than expenditures. Over the period in this chart, real per capita spending has grown at an average annual rate of 1.6 per cent while real per capita revenues have grown at a higher rate of 1.8 per cent. Needless to say, there are adverse economic consequences of a rising tax burden in terms of reducing overall economic competitiveness.

The second chart below breaks down the real per capita growth rates according to revenue and expenditure categories. 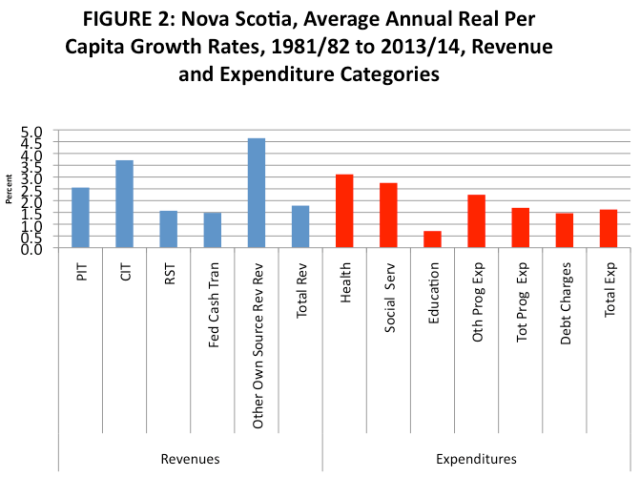 As for the expenditure side, health and social services stand out as the two biggest growth categories while education has seen slower growth, which is not unexpected given the demographics of an aging population. The health sector is definitely the biggest driver of expenditures accounting for 40 per cent of total expenditures. It’s not all due to an aging population, either. Nova Scotia’s Auditor General Michael Pickup recently released a report on Nova Scotia hospitals suggesting that there were too many hospitals in Nova Scotia and there was a need to deliver health care more efficiently.

While Nova Scotia has been able to close the gap between revenues and spending, for this to be sustainable in the long run, the province needs to shift the load of balancing the budget more to the expenditure side and take steps to make its personal and corporate income tax system more competitive.

This would be in line with the prescription of economist Alberto Alesina, whose research shows that spending discipline and tax cuts are the best way to promote economic growth.

A more competitive tax system with lower rates will be growth enhancing, which in turn will create a broader tax base thereby helping generate resources in the long run for important government services.