Police numbers in Canada have dropped

A recent article in the New York Times noted that crime in the United States in 2017 was down in the 30 largest cities and this decline was on the heels of nearly two decades of declining American crime rates and subsequently safer cities.

Yet, note was made of the fact that declining crime rates have not resulted in fewer police officers in the U.S. and that in 2016 there were actually slightly more police officers per capita than in 1991 when violent crime was at a peak.

The Canadian evidence suggests a story that’s both similar and different from the U.S. The chart below presents data from Statistic Canada on police and crime rates from 1986 to 2016. 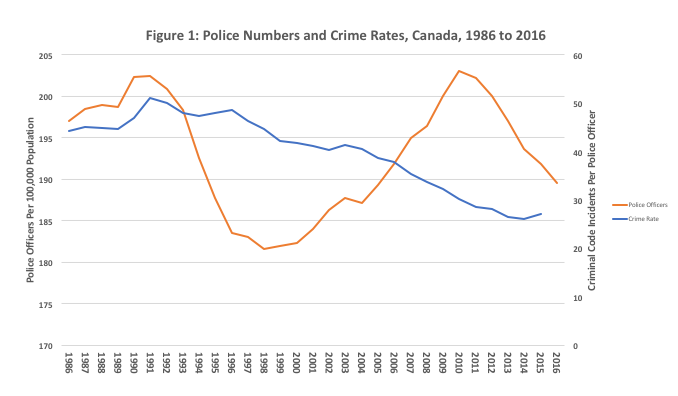 First, like in the U.S., Canadian crime rates have declined, with the number of criminal code incidents per police officer in Canada peaking in 1991 and declining quite steadily ever since.

From 2013 to 2016, police officers per 100,000 in Canada fell by nearly 4 per cent. Moreover, this drop occurred in most of Canada’s major urban centres as illustrated in the second chart below. 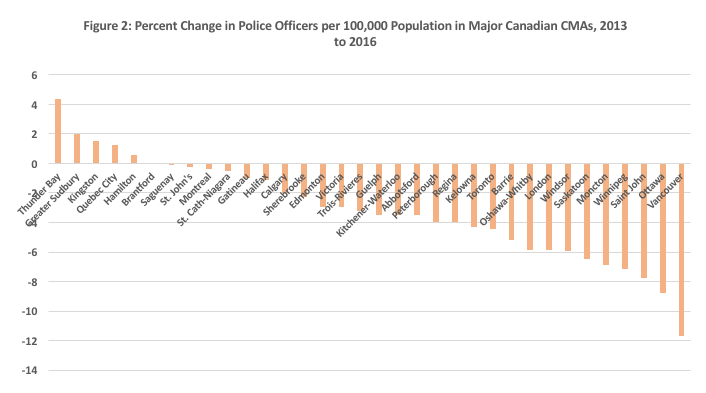 This chart plots the per cent change in police officers per 100,000 for 34 Canadian Census Metropolitan Areas (CMAs) between 2013 and 2016 and ranks them. Five of the 34 CMAs bucked the national trend and exhibited an increase in per capita police resources. These ranged from 4.3 per cent for Thunder Bay to 0.6 per cent for Hamilton, with Brantford coming in at zero. After that, the declines range from -0.1 per cent for Saguenay to -11.7 per cent for Vancouver.

Police forces in Canada have been aging and it’s to be expected that retirements and attrition are responsible for some of these declines. Moreover, there are varying population growth rates across these CMAs, which means that more rapidly-growing CMAs, all things given equal, can expect to see greater declines in police officer ratios.

However, these effects can be expected to differ across cities and regions as local policing needs can also vary as crime trends and other demands on police resources account for some of the substantial variation across CMAs.

Still, the overall result is clear, there has been a recent decline in police officers per 100,000 paralleling the continued decline in Canadian crime rates.