Most public policy discussions of provincial government deficits and debt in Canada have tended to focus on the bigger provinces: namely Ontario, Quebec, Alberta and British Columbia. Manitoba often flies under the radar especially given that its diversified economy has been quite stable, shown good growth rates and generated unemployment rates at or below the national average. Yet, Manitoba has not balanced a budget since 2009 and has seen its provincial net debt grow alarmingly high. 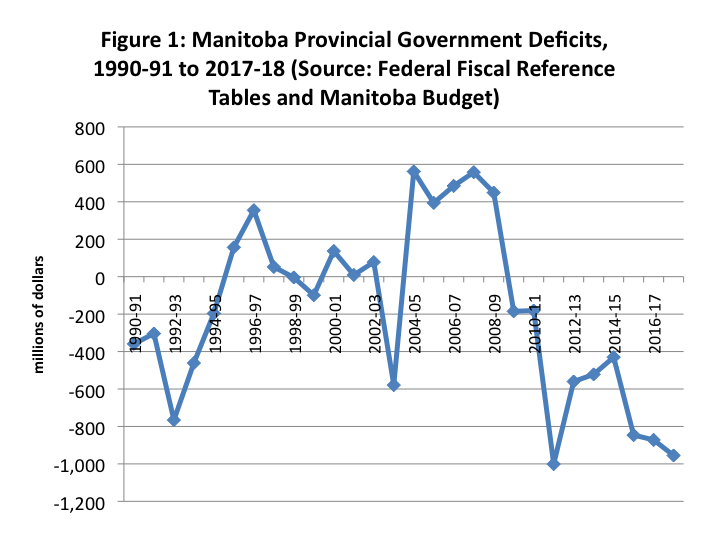 Higher debt comes at a price – higher interest costs. While Manitoba like other debt-laden jurisdictions has benefitted from low interest rates, more debt has still meant more debt service costs. For 2017-18, debt charges are expected to be $991 million –the most Manitoba has ever paid to service its debt since 1990. Debt service represents just over 6 percent of total provincial government revenues.

What’s the opportunity cost? That amount is equivalent to about 15 percent of Manitoba’s public health spending or nearly a quarter of its education spending.

Manitoba faces some challenging times. It is seeing a rising net debt and rising interest costs at a time when its provincial economy has been doing relatively well. For 2016, the Manitoba Bureau of Statistics estimated that Manitoba’s real GDP grew 1.9 percent – above the national average and forecasts growth of 2.2 percent for 2017 – fourth highest among Canada’s provinces. Despite such relatively robust growth, Manitoba is still running large deficits and those deficits might be even larger if not for the fact that the federal government provides it with billions of dollars a year in transfer payments - $4.163 billion expected in 2017-18 or about 26 percent of provincial government revenues.

Manitoba has some very pressing fiscal issues to address given that it is accumulating debt at a rapid clip, despite a well performing economy and reliance on federal transfers for one quarter of its provincial government revenue. Tucked away in the middle of the country, Manitoba has managed to keep a relatively low profile when it comes to its fiscal situation.