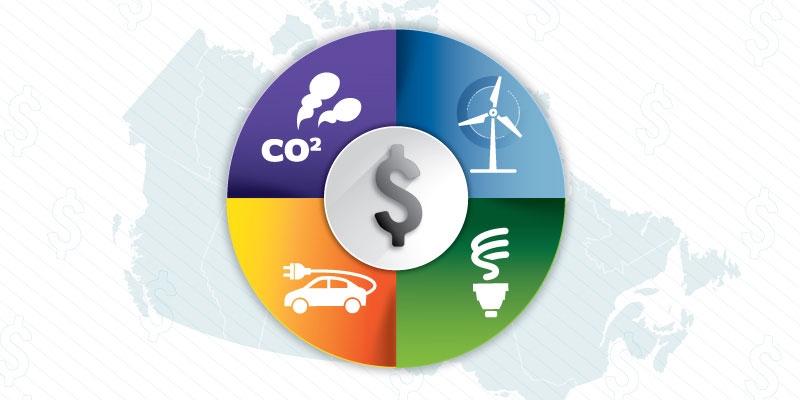 Four provinces in Canada (Alberta, British Columbia, Ontario, and Quebec) have promulgated “action plans” to reduce greenhouse gas emissions. These plans have several broad components. There is a carbon pricing component; there are assortments of energy efficiency programs; there is a “renewable energy” component; and most of the plans have vehicle electrification components (or such programs have been enacted separately from the climate action plans).

For example, Alberta’s Climate Leadership Plan consists of five key elements: a coal-power phase-out by 2030, a tripling of renewable energy generation to reach 30 percent of generation by 2030, reducing emissions from the oil and gas sector, creating Energy Efficiency Alberta to deliver cost-saving programs, and implementing an economy-wide price on carbon.

Quebec and British Columbia have similar programs. But a review of literature as well as an examination of how carbon pricing is being implemented in Canada suggests that the money of Canadians will not be well spent on these carbon action plans.

An examination of Canada’s various carbon pricing programs reveals a history of flawed implementation that undermines the utility and efficiency of carbon pricing. Rather than obeying fundamental economic principles of true revenue neutrality, regulatory displacement, and allowing markets to find lower cost ways to reduce carbon, Canada’s carbon taxes are piled on top of regulations, are not revenue neutral, and subvert the functioning of energy markets by mandating particular technologies such as wind and solar power, and electric vehicles.

With regard to efficiency programs, studies from the US and abroad suggest that home efficiency programs often underperform, proving less effective than predicted at reducing energy use, and coming in at a cost far in excess of what was originally planned. In some cases, this inverts the cost-benefit analyses used to justify the programs.

Vehicle electrification is the newest intervention into energy markets and consumer behavior. Ontario, for example, offers up to $14,000 worth of subsidies for buying an electric car, waives HST on the purchase, and throws in “free energy” for overnight charging. BC is a bit less generous, with only $6,000 subsidies for the electric cars, but is another with more lucre on tap if you install a charging station. But the laboratory of electrification has to be California, which has pushed vehicle electrification for more than 20 years. California’s experience is telling. As Los Angeles Times reporter Russ Mitchell points out, “[o]ver seven years, the state of California has spent $449 million on consumer rebates to boost sales of zero-emission vehicles. So far, the subsidies haven’t moved the needle much. In 2016, of the just over 2 million cars sold in the state, only 75,000 were pure-electric and plug-in hybrid cars. To date, out of 26 million cars and light trucks registered in California, just 315,000 are electric or plug-in hybrids.” And the cost of GHG reductions for this program? Researchers have estimated that Ontario’s spending on electric cars reduces greenhouse gases at a cost of $523/tonne, while Quebec’s price of avoided emissions comes in at $288/tonne.

Canada’s climate action plans include carbon pricing, but also rely heavily on regulatory interventions that undermine its efficiency properties, such as expanding renewable sources, energy efficiency measures, and vehicle electrification. There is little reason to believe that money will be well spent on these efforts. Every jurisdiction in Canada with a carbon pricing program has violated the fundamental economics of such programs in ways that will greatly inflate their costs and impair their effectiveness. Evidence from the economic literature suggests that the energy efficiency programs proposed by the various provincial climate plans are likely to cost more than projected and deliver fewer savings than promised. Electric vehicle subsidies are likely to hit Canadians in the pocketbooks, producing at best small quantities of greenhouse gas emission reductions at exorbitant costs.

Canadian governments have aggressively, and with little up-front analysis, rolled out climate action plans that are going to cost a great deal of money, but, most likely, will yield very little return in terms of environmental benefits. Governments would be well advised to slow or temporarily halt their climate action program implementation, and give the public solid analysis of their proposed programs’ economic costs and benefits.