Who Bears the Burden of British Columbia’s Employer Health Tax? 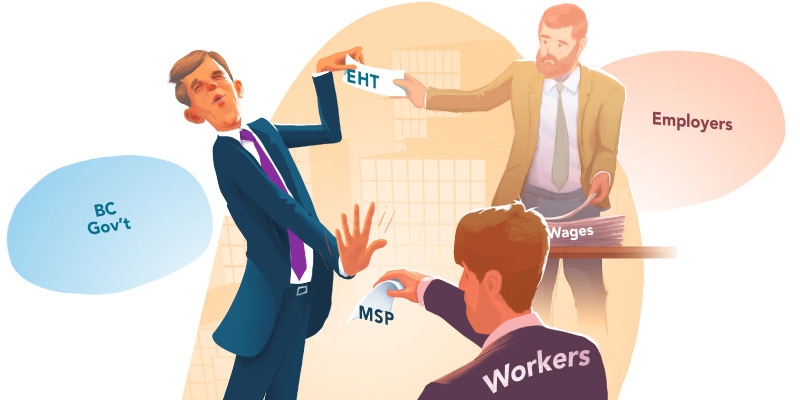 This study investigates the effect of British Columbia’s recently implemented Employment Health Tax (EHT) on the average worker’s wage and employment income in the province. Beginning in January 2019, the British Columbia government began replacing the Medical Services Plan (MSP) premiums with the EHT; the MSP is being phased out in 2020. MSP premiums had been levied on individuals and families to help finance the province’s health care system. Individuals and families with relatively high incomes were subject to maximum premium payments of up to $900, while individuals and families with relatively low incomes were exempted from paying for the MSP.

The EHT is levied on employers with payrolls in excess of $500,000. The government’s main justification for replacing the MSP with the EHT is that it would eliminate the tax burden imposed on individuals and families associated with the MSP premiums and effectively shift that tax burden to employers. The underlying assumption is that the actual incidence of the EHT would be borne by employers and would not be passed through to employees in the form of lower wages and other unfavourable labour market outcomes. However, a large number of empirical studies show that between two-thirds and 90 percent of payroll taxes are ultimately passed through to employees, primarily in the form of lower wages, but also as reduced employment. One might therefore expect workers in British Columbia to bear a substantial portion of the EHT, since the latter is effectively a payroll tax.

Since the EHT was only recently introduced, there is insufficient data to identify its effect on wage rates in British Columbia directly. However, the likely future effect of the EHT on wage rates and wage incomes should be similar to the historical effect of changes in other payroll taxes. This study examines the labour market effect of the combined changes in the employer portion of the federal payroll tax, as well as the British Columbia Workers’ Compensation Board’s premium rates. The federal payroll tax imposed on employers in British Columbia covers employment insurance (EI) premiums and funding for the Canada Pension Plan (CPP). Premiums for the Compensation Board fund occupational health and safety at the provincial level. Focusing on the effects of these established payroll taxes is an indirect way to estimate the likely labour market consequences of the EHT.

Using industry-level data for British Columbia covering the period from 1985 to 2017, this study finds that a 10 percent increase in employers’ payroll tax is associated, on average, with a reduction of the hourly wage rate by approximately 1.1 percent in the short-run and by about 3 percent in the long-run. Since the EHT increases employer payroll taxes by approximately 22 percent, this increase can be expected to reduce the average hourly wage rate earned by workers in the province by $0.59 in the short-run and by $1.64 in the long-run (in 2019 constant dollars). Given the average number of hours worked in 2019, this translates into a reduction in average annual income for BC workers of $2,987 in 2019 constant dollars when the full effects of the EHT are passed through to employees.

The key implication of this study is that the burden of British Columbia’s new EHT will be borne primarily by workers in the form of lower wage rates. This finding raises serious questions about the provincial government’s assertion that replacing the MSP with the EHT will shift the burden of taxation to fund health care from individuals and families to owners of businesses in the province.