Wishful Thinking: An Analysis of Ontario’s Timeline for Shrinking Its Debt Burden 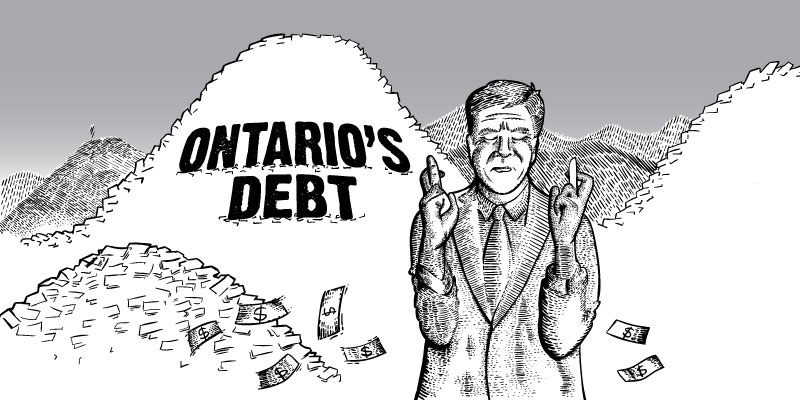 Since 2007/08, Ontario’s level of public debt has approximately doubled. As a result, the provincial debt-to-GDP ratio has climbed to historically high levels in recent years.

In its 2017 budget, Premier Wynne’s government presented a timeline for reducing the province’s debt-to-GDP ratio back to pre-recession levels—which is to say 26 to 27 percent—by 2029/30. This report analyzes the government’s strategy and timeline.

We show that the government’s selection of a target date so far into the future exposes the provincial economy to a number of costs and risks, including increased spending on debt service payments over time. What’s more, we conclude that the government’s timeline for achieving even this unambitious target date relies on several questionable assumptions and therefore is not entirely credible.

First, the government indicates there will be significant debt accumulation throughout the life of its current fiscal plan—the only period during which detailed revenue and expenditure estimates are available. The government calls for debt to increase, on average, by $11.4 billion per year over the next three years. This is down only very slightly from the pace of debt accumulation over the past three years—$11.6 billion per year.

Because the province plans to continue adding debt, it does not expect to make any meaningful progress in reducing its debt-to-GDP ratio in the near term. In fact, between the 2015/16 and 2020/21 fiscal years, the government’s plan calls for this ratio to fall at an average annual rate of just 0.4 percentage points. At this rate, it would take approximately 25 more years to return to pre-recession debt-to-GDP levels.

The government projects it will achieve its much closer target date of 2029/30 only by assuming a rapid increase in the pace of debt reduction in the later years of its timeline—for which no revenue or expenditure plans are available. In fact, the government forecasts that the rate of reduction in the province’s debt-to-GDP ratio will approximately triple in the final eight years of its timeline, rising to 1.1 percentage points annually.

Achieving this objective will require the government to essentially stop adding any new debt around 2021 and for the provincial economy to maintain sustained, robust economic growth throughout the following decade. This timeline relies upon two questionable assumptions.

First, it assumes the government will essentially stop adding debt around 2021. Given that it has added billions of dollars of debt every year since 2003 and it plans to continue doing so through the life of its current detailed fiscal plan, it would be naïve to accept this assumption at face value. In short, the government’s refusal to curtail its reliance on substantial new debt to fund its activities raises questions about the credibility of its commitments to do so beginning several years from now.

If either of these assumptions does not come to pass, the government’s target date will have to be pushed even further off into the future.

In addition to its analysis of Ontario’s debt timeline, this report contrasts Ontario’s fiscal strategy with the one being implemented in Quebec. Quebec has already stopped adding to its nominal debt burden and is therefore already in the process of making substantial annual progress in reducing its debt-to-GDP ratio.

Quebec’s significant progress in just a short period shows that it is possible to quickly reduce a large debt-to-GDP burden such as the one both Quebec and Ontario face. Unlike Ontario’s projections, Quebec’s projections that it will continue to reduce its debt-to-GDP ratio are entirely credible since they are consistent with the province’s recent performance.

The contrast with Quebec highlights the weaknesses of Ontario’s timeline. Ontario’s plan involves continued debt accumulation in the years ahead and relies on risky assumptions to offer forecasts of future debt-to-GDP reductions that, unfortunately, amount to little more than wishful thinking.