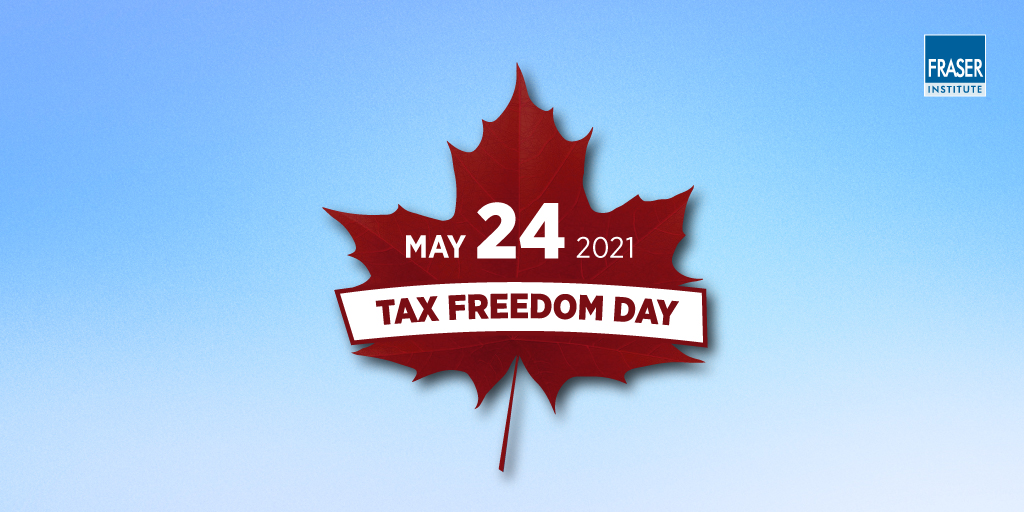 In Canada we pay many different taxes to the federal, provincial and local governments. Some of these taxes are visible but many are hidden, which adds to the confusion. Not only do we pay income taxes, we also pay property taxes, payroll taxes (such as the Canada Pension Plan), health taxes, sales taxes including the GST, taxes on gasoline, taxes on imported goods, “sin” taxes and so on.

To be clear, Tax Freedom Day does not measure the benefits or quality of services Canadians receive from government in return for their taxes. It’s ultimately up to Canadians to decide if they receive good value from these services.

In 2021, we estimate the average Canadian family (two or more people) earning $124,659 will pay $48,757 in total taxes—or 39.1 per cent of their income. In other words, if you paid all your taxes for 2021 up front, you’d give government every dollar you earned before May 24—Tax Freedom Day. After working the first 143 days of the year for government, you’re now working for yourself and your family.

This year Tax Freedom Day came seven days later than 2020 because the total tax revenue forecasted by Canadian governments will increase faster than the incomes of Canadian families. To be clear, the recovering Canadian economy is driving the increase in tax revenues (i.e. sales taxes and personal income taxes), not changes in tax rates or new sources of revenue. In fact, there were no significant changes to tax rates by the federal and provincial governments this year.

However, all signs point to a rising tax bill in the future.

The federal government forecasts a $154.7 billion deficit in 2021 while cumulative deficits for the provinces are projected to reach $78.8 billion. Although emergency spending was necessary to deal with the fallout from COVID-19, taxpayers must one day pay for today’s deficits. So the combined projected federal and provincial government budget deficits of $233.5 billion in 2021 should be considered as deferred taxes. Future generations of Canadians will foot the bill of today’s spending via tax increases at some point.

To illustrate this point, if Canadian governments had to raise taxes today to balance their budgets instead of financing spending with borrowing, Tax Freedom Day would arrive 44 days later on July 7.

Tax Freedom Day arrived a week later than last year, which means the tax burden on Canadian families is growing once again. And all indications suggest Canadians can expect a much later Tax Freedom Day in the future as younger generations bear the burden of today’s debt accumulation.